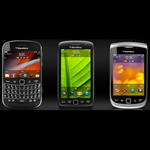 Research In Motion unveiled new BlackBerry smartphones to global wireless carriers at a special event in its home base of Waterloo, Ontario but it is still months away from starting to sell them. Smartphones running the new BlackBerry 10 operating system are critical to RIM’s survival but those phones will only be available from early 2013, possibly too late to save the company as more and more consumers abandon BlackBerrys for Apple’s iPhone and phones running Google’s Android operating system. Read the full story at Proactive Investors.