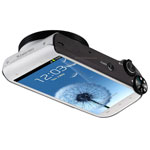 Rumor has it that the Korean chaebol will be launching its very own Android-based compact camera. Supposedly named the Galaxy S camera, this new shooter seems to compete in the same space as Nikon’s recently announced Coolpix S800c, which promises the ease of sharing videos and stills over a Wi-Fi network. Running on Android 4.0 Ice Cream Sandwich, the rumored camera’s design is said to be based on the popular Samsung Galaxy S III smartphone and would come fitted with a whopping 21x zoom optics. Read the full story at CNET.