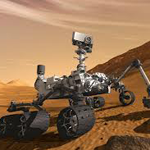 Imagine a nuclear powered machine that travels nine months and more than 350 million miles through the galaxy. Upon arriving at its target planet, the 2,000-pound machine suddenly hurtles downward in a guided entry pattern, in a period called “The Seven Minutes of Terror,” enduring temperatures as high as 3,800 degrees…

Just milliseconds before landing, it takes a series of digital photos of a mystery blotch on the horizon that is dubbed “the galactic equivalent of the Zapruder film.” No one knows what it is or what it could be. Just as soon as it’s noticed, it disappears.

The machine lands gently with the aid of a hovering sky crane, a few nylon tethers, an umbilical cord and a supersonic parachute.

Without warning, the mother ship then proceeds to dramatically crash-land, in massive plumes of dust, smoke and debris–in a place that comes to be known as “The Crime Scene.”

The machine lies dormant in its crater for weeks, silently conducting tests on itself before spontaneously coming to life. It travels methodically on its six wheels, stopping only to take high-resolution video and photographs along the way, sending the images back to its home planet at hyperspeed. When it reaches its first mission site, the machine is ordered by an alien with a Mohawk to use its nuclear incinerator to vaporize rocks and ingest soil.

The machine is not the first to be dispatched to the planet—another preceded it, and ultimately was swallowed up in a deep sand trap. But this machine is more capable. More formidable. And it is the advance party for other machines, and other manned spacecraft to follow.

… This could easily be the storyline for a Robert A. Heinlein novel, or another sequel from the Terminator series. But, of course, this isn’t science fiction.

At least… not anymore, it isn’t.

Everything I just related describes what happened with the landing of the Mars rover, Curiosity, a little over a week ago.  The nuclear rock melter… the 7 Minutes of Terror… the Crime Scene? All true. Even the alien controller with the Mohawk is real—NASA activity leader, Bobak Ferdowsi, wore that hairstyle for Curiosity’s landing.

The mission is also true-to-life. Curiosity is a robot—a very capable, intricate robot, equipped with a nuclear-powered lab that was built with the sole purpose of measuring the potential to live and work on Mars.

A few decades ago, I sat beside an unassuming elderly lady on an airplane, who—when pressed—finally introduced herself as one of NASA’s chief scientists. Her task, she told me, was to find a way to send a manned mission to Mars. We talked during the entire flight as she knitted a sweater for her grandson. I was fascinated.

Could such a mission be possible?

She told me that it was as good as impossible for a whole host of reasons: the physical effects of human exposure to high-energy cosmic radiation, prolonged low-gravity conditions and low light environment that would lead to blindness. And as if that wasn’t enough, there were the psychological effects of isolation from a multi-year journey to consider. It would probably drive even the most sane person crazy. “If we did such a mission now,” she said to me quietly over her bifocals, “our astronauts would not arrive alive.”

Watching Curiosity’s landing last week, however, I couldn’t help but think we were a little closer to sending a manned mission to the red planet.

The sheer engineering genius behind the mission was something to behold. The extensive testing, refinements and risk mitigation efforts were the result of teamwork across a broad array of disciplines and organizations.

Reading all of the accounts from the Curiosity landing, I imagined myself as a newly arrived NASA engineer.

“Seventy-five pyro-explosions to land that rover?” I’d probably blurt out. “What if any them malfunction???”

“We die,” the landing team director says, walking away.

And then he’d look back at me, “Oh, by the way, you’ll be in a complete blackout for seven minutes, until it’s over one way or another. Good luck.”

That’s the “Seven Minutes of Terror.”

Think about it. If Curiosity had augered in, what would that mean for the future of America’s space program?

Ultimately, this is why the Curiosity’s mission to Mars is so important. To all of us. It conveys the creative, scientific and engineering genius of our nation at a time when it would be easy for us to be collectively pessimistic.

The team that put Curiosity on Mars was extremely diverse—men and women of all races, creeds and colors, working together, worrying together and, ultimately, celebrating together.

Curiosity reflects what’s best about America, and the enduring importance of missions like hers.

As I watched Curiosity’s landing, I recalled a remark Taylor Wang, an astronaut aboard the Space Shuttle, Challenger, made upon his return to Earth:

“A Chinese tale tells of some men sent to harm a young girl who, upon seeing her beauty, become her protectors rather than her violators. That’s how I felt seeing the Earth for the first time. I could not help but love and cherish her.”

So, if you’re an idealist, Curiosity also conveys that we all still want to be part of something that’s larger than us.

As we were disembarking our airplane, I asked that same elderly NASA scientist, “If it’s impossible, why are you doing it?”

She smiled and shook her head gently, “Because, someday, it won’t be impossible.”

John Fenzel is a senior Army Special Forces officer who has directly served on the staffs of the Secretary of Defense, the Chief of Staff of the Army, the Homeland Security Advisor, and the Vice President of the United States. He was the principal architect of the nation's first system of public warning for terrorism, and is the author of the international thriller, The Lazarus Covenant. John can be reached at john@johnfenzel.com and on Twitter @johnfenzel