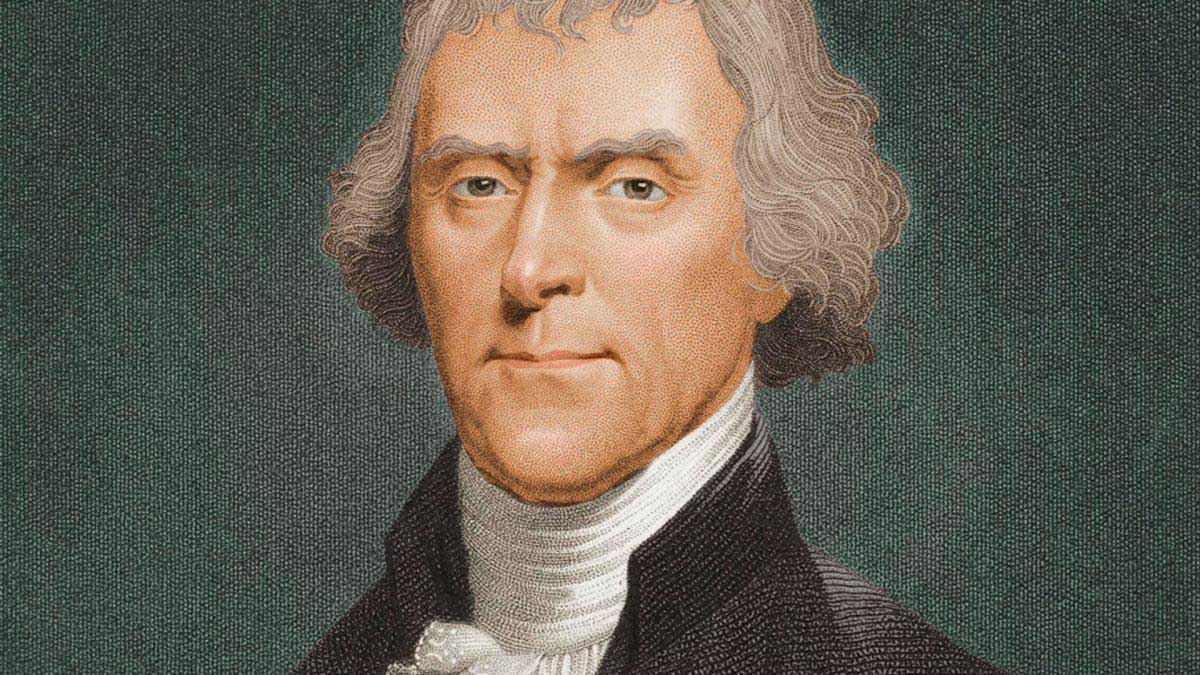 While he was in Paris in March of 1789, Thomas Jefferson wrote a letter to Francis Hopkinson that scholars have aptly named, “Neither Federalist Nor Antifederalist.” In it, Jefferson writes, “I am not a Federalist, because I never submitted the whole system of my opinions to the creed of any party of men whatever in religion, in philosophy, in politics, or in anything else where I was capable of thinking for myself. Such an addiction is the last degradation of a free and moral agent. If I could not go to heaven but with a party, I would not go there at all.”

In the closing paragraph of this note Jefferson asserts, “I never had an opinion in politics or religion which I was afraid to own. A costive reserve on these subjects might have procured me more esteem from some people, but less from myself.”

I simply love the way Thomas Jefferson expressed himself. He was a man of many remarkable talents, a seriously independent thinker and, as I’m sure you can tell, a personal hero of mine.

Now, I don’t like to discuss religion or politics in polite company. It’s pointless. Both subjects provoke passionate lectures espousing personal worldviews, and minds are seldom, if ever, changed. But… after watching some of the speeches at the Republican National Convention last week, and switching between pundit commentary on CNN, Fox News and MSNBC, I started to wonder what @tjeff would have had to do to find the facts upon which to base his independent thinking. The red and blue filters are so good, and the mass and noise levels of the pridefully ignorant are so high, it is almost impossible to find a verified fact.

IMPORTANT: Before I start down this road, let me make one thing perfectly clear. I am not going to tell you which party I belong to, nor which candidates I support, nor make any suggestions about how you should vote or whom you should vote for. This is not a political or religious writing. It’s just about information filters and fact-finding in the 21st century.

Like many of you, I believe that this upcoming election is important. And, although conventions are not as interesting as they used to be, I was excited to see how the Republican Party was going to present itself. Putting on my independent thinker @tjeff hat, I wanted to watch the least filtered, least-punditized broadcast of the convention.

On Day 2 (August 29, 2012), the major broadcast networks were not going to cover the Convention until 10pm ET. So in order to watch former Secretary of State, Condoleezza Rice speak, I turned on CNN around 9:30 p.m., hoping for non-partisan color and commentary. CNN is still a filter, but I was too lazy to go searching for CSPAN. I suffered through CNN’s coverage of Ms. Rice’s speech – I say suffered through because CNN had a lower-third graphic with all kinds of editorial nonsense flashing on the screen throughout the entire speech. I suppose that flashing select resume items for Ms. Rice under her speech was helpful to some viewers, but from my point of view it was distracting, detracting, gratuitous noise that was insulting to educated viewers and disrespectful to the speaker. When she finished, I switched to NBC to get a full HD picture with no editorial graphics.

Next up was Vice Presidential hopeful Paul Ryan. During Representative Ryan’s speech he told a story about candidate Barack Obama four years ago. Here’s the quote:

“My home state voted for President Obama. When he talked about change, many people liked the sound of it, especially in Janesville, where we were about to lose a major factory. A lot of guys I went to high school with worked at that GM plant. Right there at that plant, candidate Obama said: “I believe that if our government is there to support you… this plant will be here for another hundred years.” That’s what he said in 2008. Well, as it turned out, that plant didn’t last another year. It is locked up and empty to this day.”

According to the Washington Post, the decision to close the plant was made in June 2008, when George W. Bush was president. Ryan says that Janesville was “about to” lose the factory at the time of the election, and Obama failed to prevent this. This is false, as Ryan knew in 2008 when he issued a statement bemoaning the plant’s impending closing. Republican Fact Checkers say that the Washington Post Fact Checker is wrong and that the plant did close in 2009 under President Obama’s watch.  What would an impartial view of the speech have thought?  What did you think?

Now, just for a second, put your politics aside. Forget whose side you’re on and think about this the way @tjeff would.

None of this is surprising, nor is any of it news. Politicians lie all the time no matter what party they represent. But, with all of your filters in place, how can you find the truth?

Take everything else in Representative Ryan’s speech and fact check it for yourself. I did, just like @tjeff would have, and it took hours. It would have been so much easier to just let my preferred filter do the work for me. It would have been blissful to blanket myself in the comfort of the information that I wanted to hear. It would have been super easy to cocoon myself inside my filter set. If I just laid back and enjoyed it, I too could be loud, proud and pridefully ignorant (if I were ever to let myself discuss politics in public).

But, just this once, just to confirm my own thesis that filter success is speeding the end of social discourse, I spent the required time with the transcript of Representative Ryan’s speech and my laptop. After two hours of searching other stories in the Representative’s speech, I can say with authority that it will be hard for you to find verifiable facts with two sources that would allow you to take this speech at face value (and I am being kind). Again, this is not a political comment on any particular thing that was said – only a comment on how it was filtered.

Here’s the really unfortunate part – it is abundantly obvious that the vast majority of people don’t care. Why bother to fact check? Why take the time to form your own opinion? You can let Rachel Maddow (blue states) or Bill O’Reilly (red states) do it for you. If you spend any time reading the millions of words written about this single speech, you will quickly realize that politics and religion share a single attribute – they are faith-based.

What is the truth? Whose truth? With whom can you debate and discuss the issues? Where are the facts? What has happened to civil, social discourse? The filters we have evolved are so personal and so good; “Such an addiction is the last degradation of a free and moral agent.” @tjeff must be turning over in his grave.