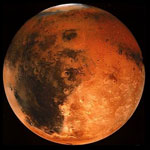 There’s plenty of science suggesting Mars was once home to water. But new research suggests that much of the evidence, in the form of clay, could have come from lava and not lakes—and that would decrease the chance of life having existed on the red planet. Previously, scientists have assumed that layers of clay found on Mars formed either by soil interacting with standing water or from water bubbling up from hydrothermal vents. Either way, the presence of moisture prompted researchers to suggest that life on Mars was a definite possibility. Read the full story at Gizmodo.