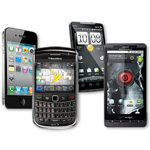 Forget screen size and processor speed — price makes a bigger difference than anything else for smartphone buyers, a new study suggests. In a survey released Thursday by Qualcomm — containing some questions submitted by Mashable — about 71% of survey respondents said they influenced by prices and promotions when selecting their next smartphone, compared to just 50% who use screen size as a determining factor. Battery life was at the top of the list, with 68% of respondents saying that influenced their buying decision. Read the full story at Mashable.