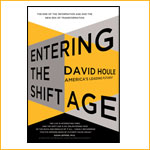 As a futurist I speak and write for a living. The spoken word and the written word are the coins of my professional realm. Now think about that, the phrase “written word.” Wow how we continue to use legacy phrases! We don’t say “typed word” or “dictated word” or “keyboarded word.” As a futurist I always reflect on this. We still use the words “sunrise” and “sunset” from pre- Galileo and Copernicus days. The sun doesn’t rise or set, the earth rotates.

It is this kind of conundrum that I have had as a futurist author of books and the publishing industry. It happened the first time I approached the publishing industry five years ago, when I had predicted something like the Kindle but before the Kindle had been announced. As a futurist I was walking into an industry that I knew was about to be seriously disrupted–and they didn’t even see it.

So, three books later I am now about to have my fourth book published. This time I have the joy of working with a visionary publisher with whom I am creating at least one of the new models for trade book publishing here in the Shift Age. Sourcebooks is publishing my book with the Agile Publishing Model — APM for short – we created for “Entering the Shift Age.”

Traditionally an author of a non-fiction book will go down a very solitary path of writing and research, then submit the manuscript to their editor at a publisher who will work with the author to create a final version of the book. This book then gets published on an excruciatingly slow timeline that still exists from the old pre-Kindle days. This long, drawn out largely solitary process then results in a few moments in the retail sun unless it becomes a best seller. As a futurist I look at this as last century’s model. The smartest thinkers in the publishing industry are looking around and ahead to try to figure out how publishing will morph to more reflect the rapidly changing world of digital media.

The APM model is a new fresh attempt to provide a model for the future of publishing. So, here is the APM process that is bringing my latest book to market.

First, Sourcebooks and I created a user/subscriber base of people who signed up for both free content and the opportunity to participate in the APM. Second, each of the four parts of my book was uploaded for this community to read and comment on. The goal wasn’t to get a “thumbs up” or down or get some crowd-sourced vote, but to encourage constructive suggestions, good research and hopefully new ideas this author might not have considered. This was particularly important, because as a futurist I am writing about very dynamic and rapidly changing topics, trends and developments.

Each of the four parts of the book was left up for several weeks for suggestions and comments. While there were a number of comments, what emerged were several truly insightful individuals whose comments altered some aspects of the book. These people have been thanked in the
acknowledgements of the book. So, the APM invited and in fact created constructive contributions to my book.

Then, the next transformative part of the APM was rolled out. The entire book was divided into 12 mini-ebooks, priced from $.99 to $4.99, all of which will become available prior to the publication of the full book in print, ebook and enhanced ebook formats 1/1/13. This does several
things. First it allows readers to sample the book at low costs. Second it allows readers to buy just of the parts of the book they are primarily
interested in. For example, if you are interested in the future of Education, you can buy that mini-ebook for $.99 or the future of Power for the same low price. In other words, we have to a great degree disintermediated “the Book.” Third, we have created a viral opportunity. If people sample parts of “Entering the Shift Age” and like it, they may not only buy the full book, they may suggest the ebooks to others, increasing the number of people who become readers.

Currently there are four of these ebooks now available on Amazon and BN.com.  Parts One and Two is the first ebook called “Welcome to the
Shift Age.” The second ebook is Part Three, “The Transformation Decade: 2010-2020.” Ebook three is “The Five Contexts of the Shift Age” and the fourth “The Shift Age Generations.” Basically there will be a new ebook published each week for the next eight weeks. I personally find this an exhilarating process, having a new title appear each week!

I spoke about this with Shelly Palmer one of the gurus of the digital world. He interviewed me on a podcast to discuss this new model. I am a featured writer for Shelly’s Digital Leadership and an avid reader of his daily blog and respect his thinking and insight. I urge you to take a listen to this podcast. He and I may do additional interviews on both the APM itself and perhaps on any of the ebooks that he finds of interest as he looks into the digital future.

This new publishing has also caught the eye of a traditional print outlet, the Chicago Tribune where I was interviewed about my experience as a writer and my thoughts about the APM as a futurist author.

Finally, the last innovation of the APM occurs when the full version of “Entering the Shift Age” is published in January. In addition to the regular print and ebook versions there will be an enhanced ebook version that will include videos I taped or had created for inclusion into the book. This is currently very rare, but I think will become much more commonplace in the future as ever more people read and view books on tablets and smart phones.

So there you have it, the Agile Publishing Model, a new model for publishing in the Shift Age and in the new digital landscape of publishing.