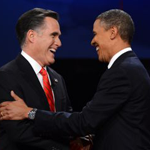 Our democracy is but a name. We vote? What does that mean?
It means that we choose between two bodies of real, though not
avowed, autocrats. We choose between Tweedledum and Tweedledee.

Did you happen to catch the “debate” last week? The monumentally wooden Jim Lehrer spent most of his time trying to get Romney and Obama to air how different they were from each other. Lehrer was not so much of a moderator but more of a human jack-o-lantern with eyes looking as if he was drawn by a Japanimation artist.

I spent a lot of time watching the pundits afterwards further making a case for the “stark differences” between Obama and Romney. CNN and MSNBC felt the differences were not drawn as sharply as they could have…and “should have.” Chris Matthews was practically foaming at the mouth because Obama did not draw enough distinctions.

In short, Tweedle Dum appeared too much like Tweedle Dee.

I have been writing about politics, media and marketing for over thirty years now. The binding thread of all three is that they all deal with illusion. My particular style of writing is to expose the illusions, sort of like that guy sitting in the front row at a magic show saying the bird is in the front, left pocket.

“There’s not a dime’s worth a difference between the two of them.”

Here is just a partial check list of areas in which Tweedle Dum and Tweedle Dee are in almost perfect harmony:

“Between Romney and Obama, there isn’t all that much difference.”

I actually could go on for quite some time. While I disagree with most of the above, that is not the point of this post. My purpose is to point out the illusion, to demonstrate that the differences are exaggerated by powerful interests that seek to foster the illusion of choice.

I know most reading this are about to protest and ready with MSM talking points on the minutia of differences between them. Before you read the rest of this post, spend 8 minutes of your life watching this video of Obama and Romney in their own words:

Now for the speculation.

We have demonstrated that the pigeon is in the inside front pocket. But why does the MSM wish to continue the illusion? Why does the MSM want to foster the non-sensical notion of “choice” and therefore seek to draw distinctions without real differences?

The answer is quite simple. As long as we FEEL there is a difference between these candidates, we will not seek out candidates that want real change. The MSM exists to perpetuate the myths of the power elite. In essence, to protect the elite. To protect its interests. To protect the status quo. So if we busy ourselves with the illusion of choice, real change can be avoided.

A candidate like Ron Paul threatens the status quo because he represents real change. He would knock down the military-industrial complex. He would bring troops home from 170 bases around the world. He would eliminate the Federal Reserve. He would decentralize decision from authoritarian government to individual states. He would not make war without a Congressional declaration of war.

That is major stuff… and real change.

How much money did Goldman Sachs give to Ron Paul’s campaign? They actually strip the illusion by giving generously to both candidates…but the MSM keeps that quiet. It matters not to Goldman which candidate wins, as long as the winner is Obama or Romney.

Because of the Internet, the grip of MSM and therefore the elite’s mouthpiece is waning with each passing election. That is why the elite tried hard to pass SOPA and will try many new things in the coming years to control information. The elite requires a powerful advocate.