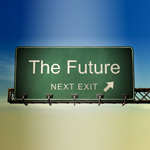 One striking aspect of this presidential campaign season is the lack of vision for, or even mention of, the future. Neither campaign is talking much about how it sees the future unfolding. We’re hearing differing views about how 20th Century jobs can be created. Some candidates (not specifically presidential candidates) are speaking of creating high-paying, hi-tech jobs in New York, my home state.

Here’s the problem: We are never going to need vast numbers of unskilled laborers again. In fact, we don’t need them now. People who translate the value of their muscles to wealth by repeating minimally complicated algorithmic tasks are being replaced by computer-controlled machines at an alarming rate. This trend will never reverse; these jobs can never be recreated.

To make matters worse, the speed and capacity of computing power is increasing at an exponential rate, which means that in a very few years, people who translate the value of their brain’s computational power into wealth by repeating minimally complicated algorithmic tasks will be replaced by computers.

Do not confuse the idea of your brain’s computational power with the power of reason, the ability to think strategically or even just the ability to think. Consider the act of adding a column of numbers – it is not a skill that you need a human to do, and it never will be again. There is no philosophical or existential or theoretical or metaphysical angle to the previous statement. You don’t need a human being’s brain to add a column of numbers.

There are thousands of jobs that humans do now, that computers can and will do better and more cost-effectively. Computer-controlled machines can and will replace people doing what most perceive to be jobs that only people can do. It is an immutable fact of connected life in the 21st century.

Now, please use your very human, very powerful brain to think about all of the jobs in the world that people currently do that require computation based upon algorithms, but very little or no thought.

Go to alexa.com and type in the name of your favorite website. There is a bunch of prose on the page — it was not written by a human, it was written by an algorithm.

In a couple of minutes, you will think of hundreds of examples of jobs that are so structured that, in many cases, they would be better accomplished by a computer than by a human. From customer service, to fraud and crime prevention, to monitoring the security of your premises, computers with highly sensitive sensors and good data-to-prose software will almost always do a better job than an organic life form. Plus computers don’t sleep, take breaks, daydream or have mood swings.

If I were you, I’d be thinking that this is all science fiction and that machines and computers are not going to replace humans anytime soon. You may be right. But I have news for you: exo-digitally enhanced humans are better than regular humans, and this is the first step.

What is an exo-digitally enhanced human? It is a person with a network-connected smartphone, tablet or other digital tool who knows how to use it. The best users have already outsourced their factoid and informational memory to Google, Wikipedia, IMDB, PubMed and other specialized databases. Short number memory is outsourced to the favorites section of your smart phone software. Way-finding cells in your hippocampus are atrophying because you have outsourced your way-finding to GPS systems and mapping software. I could go on and on, and so could you.

This trend is going to continue. But it gets worse.

Just one year ago, it took an IT professional about three to four hours to on-board a new executive to our staff. First, we purchased a new computer, which the IT manager loaded up with Microsoft Office and all of the other programs we use. It was given access and permissions to our VPN, etc., etc., etc.

This year, it takes an IT professional about three to four seconds to accomplish the same goal. New execs use their own computers and receive a company email address, which grants them access to 100% of the business software we use through the cloud. Nothing downloaded, nothing patched, nothing purchased, nothing to tweak – just instant access to everything on any device our new execs might already have.

We no longer have house elves toiling racks of servers, no one is patching anything and no one is managing physical discs or licenses. We only need one IT person to administer email addresses and permissions. In practice, this is not even a full-time job, so six highly skilled people lost their jobs. We didn’t buy a new computer – Intel’s sales numbers tell the story. We now live in a post-PC world. We didn’t buy any physical media or use any gas to move the goods. UPS and FedEx need less people. We didn’t buy any local back-up drives – that entire value chain is negatively impacted.

Stay tuned and look for Part 2, in which we’ll talk about endo-digitally enhanced humans. By 2025, it’s going to be a whole new ball game. Hang onto your iDevice!

Previous13-inch Retina MacBook Pro might start at $1,699 NextRevealed: Everything that Google will unveil at its Android event on October 29