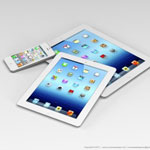 Invitations to Apple’s next big event, announcing the highly-rumored iPad Mini, will be sent out on October 10. The event will follow a week later on October 17th, with the launch of the device coming shortly after on November 2nd. All this according to a report in Fortune, which cites an Apple investor who has heard the dates from “multiple sources.” Rumors have been circulating about an iPad Mini for some time, with many of those rumors pointing to an October product announcement. Read the full story at Mashable.

PreviousIkea to sell only LED-based lighting by 2016, wants to be greener than your sofa bed NextOffensive Combat: Six Dang Reasons You’ll Want to Play