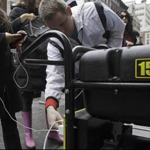 New York City’s fast-paced technology scene, known as Silicon Alley, tried not to lose a step after Hurricane Sandy knocked out power lines, devastated the public transit system and left portions of the city flooded. On Tuesday, companies from small startups to major players such as Google and Facebook, scrambled to balance employee safety with attempts to conduct business as usual. With laptops, smartphones and a dash of ingenuity tech companies powered through the adverse conditions— or at least tried to. Read the full story on usatoday.com