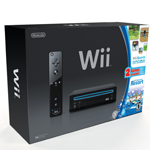 Just in time for the holidays, Nintendo has dropped the price of the Wii video game console. The game maker on Monday morning announced a new $130 bundle that includes a black Wii console and the games Wii Sports and Wii Sports Resort in one disc. The cheaper package will be available in the U.S. by Oct. 28, and will also include a Wii Remote Plus and a Nunchuk controller, both in black, Nintendo said. The new bundle replaces the current Wii package, which sells for $150 and includes a black console along with New Super Mario Bros. Read the full story at PC Mag.