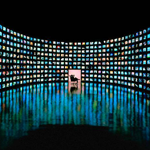 The week of October 21, 2012 found TV, radio and the Internet abuzz with screens. Apple launched its not-so-secret iPad mini to a chorus of gushing admiration, or a collective “meh” depending upon which side of the fence you stand. National Public Radio’s Morning Edition embarked a week-long series of daily stories called “How we watch what we watch: The Future of TV” that explored topics like, “So Many Screens, And So Little Time To Watch” or “For Sports Fans, A Plethora Of Platforms To Watch On.” It seems at this moment in history we have gone screen crazy… and I love it!

Much Ado About Screens…

In 2009, I wrote a book called Screen Future: The Future of Entertainment, Computing and the Devices we Love, a collection of research I had done with my colleagues at Intel going back to 2005. My work as Intel’s futurist is called futurecasting. I don’t make predictions. I develop models for what it will feel like to be a human 10 to 15 years in the future. I do this by using a wide range of research by some wicked smart people both inside and outside the company to help Intel know what it will feel like to be a human a decade from now, so they can in turn design, develop, produce and ship the complex products that take them 5 to 10 years. It’s of vital business importance today for the company to know what people will be doing with their chips and platforms in the future.

So, you ask, what were the business models in 2005 telling us about what it would feel like to be a human in the year 2015? Screens! Really, I’m not kidding.

Beyond that, all of these screens would work together to adapt to whatever task you wanted. Ultimately, in 2015 it would be about choice. We would get to choose the screens we wanted for how they fit into our lives and the things we wanted to do. Always bet on choice. Choice always wins.

Our future is full of screens and they will continue to pop up in fun and useful places: in our glasses and contact lenses; on our planes, trains and automobiles; in some of the most boring but insanely productive places, like government offices and hotel check in. As we look to the future, we should expect screens. We should keep an eye on screens and how people are interacting with them.

But screens are not the area to focus on. If you are obsessing about screens, you aren’t looking at the right thing. Screens will only become less scarce a commodity as we move to 2015 and beyond. Ultimately we should focus on what’s on the screens… and I don’t mean the content.

Our current screen mania is giving us an incredible opportunity to touch the lives of nearly every human being on the planet. Screens have revolutionized how we do business. They have radically altered how we communicate and how we understand the world around us. They have sped up and expanded how we do global science. They have given voices and power to millions who, just a decade ago, were unknown and silent.

The great opportunity in our screen future is revealed when we see all of these screens as windows to connect with people. The power of those screens can connect us with the people and stories we love. They can make us more healthy, productive and sustainable. The future is about what we can do with all of the screens and not the screens themselves. If you’re just staring at the screen, you’re looking at the wrong thing.

PreviousWindows 8 cheat sheet: What, when, where, how much, and should you? NextShelly Palmer Radio Report - October 26, 2012