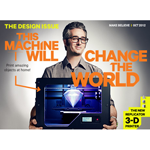 Are you a Maker? Do you know a Maker? Do you know what a Maker is? There has been a lot of attention recently around Maker Culture. New York City Mayor Michael Bloomberg, along with the NYC Economic Development Corporation, proclaimed the week of September 24-30, 2012 as “Maker Week.” Wired Magazine’s October cover features the founder of MakerBot (and one of the leaders of the Maker movement) Bre Pettis, holding his company’s newest 3D printer with the headline “This Machine Will Change the World.”

Is Maker culture just a small movement of passionate hobbyists, or is there something more going on? Has Maker culture gone mainstream? What effect could it have on the future?

The culture of making has been around as long as humans have. All humans are makers, builders and inventors. We are incredible problem solvers. The Maker culture that’s getting so much attention recently is closely aligned with technology, but that’s just the beginning. From these geeky roots it has grown, touching everything from cooking, medicine and even a third industrial revolution.

Maker culture as we know it today started to gain popularity in the 2000s, marked by the launch of Dale Dougherty’s MAKE Magazine in 2005. “I thought the future of computing would not just be in computers, but it would be out in the world itself,” Dougherty told the New York Times in a 2010 interview.

The essence of Maker Culture is the intersection of computing hardware, software and the real world. This is no better typified than with a 3D printer. These devices are a bridge between the digital world and the stuff around us. If you can imagine it and design it on your computer, you can print it.

Maker culture is a mindset and a way of approaching life. Many makers have grown up with a smartphones in their pocket. They’ve always had the internet and the tools that transformed almost every aspect of our lives. To them, these tools and the ability to take two things and “hack” them together for a new purpose is the way it’s supposed to be.

Maker culture is moving from a small movement to the mainstream. There no better proof of this than the attendance figures at the Maker Faire. Created in 2006 as a gathering for the MAKE magazine crowd, the Maker Faire is held in over 20 cities worldwide with the flagship faire in the Bay Area, pulling in more than 120,000 people. The cost of 3D printers has dropped from thousands of dollars to $400, allowing many to begin printing out whatever their imaginations can dream up. I’ve talked to many folks in the technology sector that speculate that it’s just a matter of years before you can buy a 3D printer for under $100.

The mainstreaming of Maker culture is important for our future and makes me very optimistic. When I meet young makers with their hacking parents, it gives me confidence in the coming decades. We need more makers. The spirit of making is important for us to deal with the problems and crisis that will inevitably arise. We can’t all be consumers.

Advice from the Futurist

As a part of being a futurist, I travel around the world and talk to people about the future. Parents often ask me how to best prepare their children for the future, as though it’s coming for them and if they aren’t ready, they’ll be taken out. It’s really not like that. It’s not them against the future.

I tell them to learn to code. It’s that simple. Everyone should learn to code. Code is how humans talk to computers. It’s how computers talk to us. I don’t make predictions about the future, but I do know that we are going to have a heck of a lot more computers in our lives in ten to fifteen years than we do today. It would be really good if we know how to talk to them and we were better at having them talk to us. Learn to code. Really.

The Maker culture is moving into the mainstream. It’s my hope that it goes even further. The Maker generation, the Hacker generation, the generation of builders who have never known a time when they couldn’t imagine something, make it and print it out, will do incredible things. Imagine what innovations and businesses will arise from an imagination that is not limited in the digital or physical world. The exciting part is that we don’t know what they will build, but these makers are going to change the world.