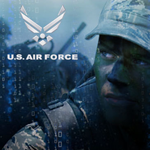 The US Air Force has spent over $60 billion on the F-22, a fighter that doesn’t really work and sometimes chokes people. How much is it spending on Twitter? Judging by the output, negative $50,000. It’s hard to figure out exactly what the taxpayer-funded @usairforce is there for. It’s a mix of historical blips, links to soccer matches, factoids, strange motivational shouts, and lots of exclamation points. It’s the drunk Thanksgiving uncle of Twitter, telling you to take off that shirt and play some god damn touch football or you’re going to get bodyslammed. It’s Chuck Grassley with a silver tongue and a nuclear arsenal. Read the full story at Gizmodo.