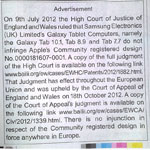 As with the apology that appeared on Apple’s web site, this “apology” isn’t called an apology and doesn’t contain the word “sorry” or anything vaguely similar. It’s a small, short, factual summary of the case in which Samsung was found not to have copied Apple’s iPad design, along with a link to the ruling we doubt anyone would bother typing in.