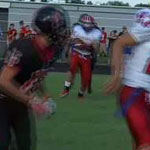 Please forgive this opening foray into my youth but the experiences have led me to years of study and eventual application to my business. Growing up I was obsessed with sports. I played football and baseball. I knew sports meant something different to me than to my friends on the team.

In football, I read the playbook for each position on the team. Most of my friends would only pay attention to their position, but I wanted to know where everybody was supposed to be on every play. I played middle guard on defense, and at 160 pounds with pads on, this was an odd position for a little guy back then. I should also mention that we were undefeated for two straight years and had the longest winning streak in Illinois.

In my two years on the varsity, there was never a successful screen pass against our team. Not a single one! Somehow, I always “knew” when a screen pass was coming. One day after viewing the films following a victory, the coach pulled me aside and asked, “Ali, can you tell me how you always know when a screen pass is being thrown?”

Fast-forward to the spring as football gave way to baseball. I remember one incident like it was yesterday. We were in the bottom of the last inning of a tie game. I was on deck and there was a man on second. A vivid image of me hitting a line drive right over the pitchers head up the middle overcame me.

This was very odd because I was a dead pull hitter and rarely hit the ball up the middle. It wasn’t a “wish”, it was a fully formed premonition. The guy in front of me struck out. Now it was my turn at bat, and on the second pitch, the premonition became a reality…exactly as imagined. We won the game…but I wasn’t jubilant because the weirdness was too difficult to shake.

And these incidents weren’t isolated. They happened to me dozens of times in both sports. I never spoke about those experiences then because I was afraid my teammates would think I was crazy. But I have spent the better part of my adult life trying to understand this phenomenon. The journey took me from Maslow’s “peak experiences”, reading all of Jung’s works, Jospeh Campbell’s works, Csikszentmihalyi’s “Flow”, and Andrew Cooper’s “Playing in the Zone” to name a few intellectual pit stops along the way.

I also started to notice how others described this feeling. Here is a quote by Fast Eddie from the great movie, The Hustler: “But I just hadda show ‘im. Just hadda show those creeps and those punks what the game is like when it’s great, when it’s REALLY great. You know, like anything can be great, anything can be great. I don’t care, BRICKLAYING can be great, if a guy knows. If he knows what he’s doing and why and if he can make it come off. When I’m goin’, I mean, when I’m REALLY goin’ I feel like a… like a jockey must feel. He’s sittin’ on his horse, he’s got all that speed and that power underneath him… he’s comin’ into the stretch, the pressure’s on ‘im, and he KNOWS… just feels… when to let it go and how much. Cause he’s got everything workin’ for ‘im: timing, touch. It’s a great feeling, boy, it’s a real great feeling when you’re right and you KNOW you’re right. It’s like all of a sudden I got oil in my arm. The pool cue’s part of me. You know, it’s uh – pool cue, it’s got nerves in it. It’s a piece of wood, it’s got nerves in it. Feel the roll of those balls, you don’t have to look, you just KNOW. You make shots that nobody’s ever made before. I can play that game the way… NOBODY’S ever played it before.”

Or here’s how Billie Jean King described being in the zone: “It’s a perfect combination of…violent action taking place in an atmosphere of total tranquility…When it happens I want to stop the match and grab the microphone and shout, “That’s what it’s all about.” Because it is. It’s not the big prize I’m going to win at the end of the match, or anything else. It’s just having done something that’s totally pure and having experienced the perfect emotion, and I’m always sad that I can’t communicate that feeling right at the moment it’s happening.”

So what does being in the zone during athletic competition have to do with me here and now well into the “third act” of my life’s play? I continue to have these moments as a businessman, moments that find me.  In fact, that’s the only way they happen, because when I actively seek them, they resist and recede. I also know that the more fixated I become on any end prize – a liquidity event, optimizing profit, etc. – the less likely it will happen.

I’ve learned that these moments can’t be forced.  Nor can they occur when I am too busy being busy. But when we create a perfect campaign…or our entire organization is buzzing like a well-run beehive, there is magic and mystery. Yes, there are still transcendent moments in business. They are safe and waiting within the calm of the overwhelming chaos.