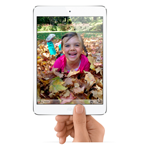 This is not to say that Google’s Nexus 7 or Amazon’s Kindle Fire HD are not better priced, more fully featured and a better value for your tablet dollar – they are. It’s just to say that if you are going to spend time comparing a cheaper 7″ tablet to an iPad Mini, just buy the iPad Mini – it will save you time and grief.

The iPad Mini’s specifications are meaningless. It is small version of an iPad 2. This means nothing in practice. You won’t care about the 1024×768 screen resolution. While it’s not a Retina display, it’s fine. You won’t care about the A5 processor; it’s fine, too. In fact, Apple has carefully balanced battery life and real world use cases against cost (its own profit margin) and what consumers will actually be willing to purchase. The iPad Mini is well executed against this equation.

Now, I’ve had my iPad Mini for long enough to say, without hesitation, if you’re thinking about a 7″ form factor tablet, the iPad Mini is a great choice. The only caveat is the standard Apple caveat … the hardware is overpriced. Acknowledged. Let’s move on. This is not new news.

I have been using a Kindle Fire since the units came out. I love the 7″ form factor, but the Kindle Fire is not a tablet – it’s an over-featured eReader. It’s awesome for $199, but not truly useful for anything but reading and super light email. I am a huge Amazon and Kindle fan, so this was not an issue. That said, the only thing my Kindle Fire taught me is that I would love an iPad Mini (if one ever came to market).

It did, so I now use the Kindle app for iPad — which is as good or better than the native Kindle app running on my Kindle Fire. Apple does make it a bit of a pain to purchase books through Amazon. You have to use your browser and make your purchases at amazon.com, as opposed to purchasing through the Amazon or Kindle apps. It’s a minor inconvenience, but the work-around is simple.

What about games, movies and all the other stuff you need a full-featured tablet for? Don’t worry – it all works. Remember: an iPad Mini is a little iPad 2.

What about iOS6, iTunes and Windows 8? It’s buggy and horrifying. Go read some tech notes before bringing an iDevice into your Windows 8 world.

Will you love the iPad Mini? Yes.

That’s the short answer. It is lovable. I use a MacBook Air for my heavy lifting and a Verizon iPhone 5 as a phone. The Verizon iPad Mini is the perfect companion in size, speed and power.

If you are not an iPhone or Mac user, is the iPad Mini still lovable? Not so much. If you are an Android phone user, you have to look closely at the Google Nexus 7 and, if you need 4G connectivity, wait until LTE becomes available or pick up the AT&T HSPA+ pseudo 4G Nexus 7 now for $299. There is no reason to purchase an iPad Mini if you are an Android person. None.

What if you already have a full-sized iPad? Is there still a reason to get an iPad Mini? This comes down to personal choice. My wife loves the iPad Mini because of its size. It easily fits in her handbag and it is very lightweight. She retired her iPad 3 (New iPad) in favor of the iPad Mini. You probably don’t need both, but only you can make that decision.

What if you already have a Kindle Fire? Apples and oranges — the iPad Mini is a full-featured tablet. The Kindle Fire is not.

The bottom line – The iPad Mini is a winner. Yes, it will be much better with a Retina display and an A6 processor when the new one comes out in March or next summer. But for now, if you want an iPad Mini, just go buy one. After all… nothing else will do!