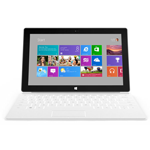 Earlier in the year we brought you the news that Microsoft’s Surface Pro pricing would run in the $999 range. Now, Microsoft has confirmed the pricing in a post by Surface GM Panos Panay. The Surface Pro models will come in two flavors, with a 64GB model running $899 and a 128GB model running $999. Both Surface Pro models will include a Surface Pen and the ability to use a touch Cover or Type Cover, though those are sold separately. The Pro versions of the Surface feature some differences from the already released Surface RT models. Read the full story at The Next Web.

PreviousSpotify Made You Listen To More Music, WillCall Gets You To Go To More Concerts NextGroupon partners with Major League Baseball to become its official daily deals site for its 30 clubs