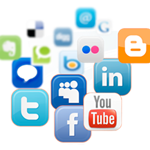 “Dark Social: We Have the Whole History of the Web Wrong.” That’s the provocative headline of Alexis Madrigal’s fascinating story in The Atlantic.

The premise of the piece is that most marketing people assume that the social web equals Facebook, Twitter and other social networking sites. This assumption leads to the belief that companies wishing to maximize their social visibility are best served by optimizing the posting and sharing that goes on via these sites, and you will be optimizing your brand for social.

“Here’s a pocket history of the web, according to many people,” wrote Madrigal. “In the early days the web was just pages of information linked to each other. Then along came web crawlers that helped you find what you wanted among all that information. Sometime around 2003 or maybe 2004, the social web really kicked into gear, and thereafter the web’s users became to connect with each other more and more often. Hence Web 2.0, Wikipedia, MySpace, Facebook, Twitter, etc. I’m not strawmanning here. This is the dominant history of the web as seen, for example, in this Wikipedia entry on the ‘Social Web.’”

This capsule summary rings true with me, based on what I, too, hear from people. I am often asked by audiences to whom I speak, “Isn’t the growing power of word of mouth the result of the growth of social media?”

The Atlantic article highlights what is wrong with this assumption. The majority of online social sharing, it reveals, is not via social networks, but rather person-to-person via email or instant messages. Sharing via social networking sites plays only a minor role. Here is the capsule summary of what the Atlantic reports:

Dark social, concludes The Atlantic, “is not a niche phenomenon!”

These findings are highly consistent with the data that my firm has been collecting for a number of years now. According to our research, when it comes to online word of mouth about brands, IM and texting account for the greatest share — about half of all such conversations. Email and social media sites are about tied at half that level. Taken together, then, IM/Texting and Email account for more than three quarters of all online brand conversation while social media accounts for a quarter.

But in fact, the size and scope of so-called Dark Social is actually far bigger than The Atlantic says. The biggest missing factor is the social sharing that takes place offline, in the real world – primarily face to face and also via the phone. While some like to think about this as “good old fashioned word of mouth,” it is not a relic of a bygone era. Rather, it remains very contemporary. Just as astronomers estimate “dark matter” as representing almost 90% of all matter in the universe, offline word of mouth accounts for 90% of all brand-related word of mouth. Perhaps we should call it “Super Dark” in contrast to that the somewhat more visible email and IM sharing.

Looked at in light of this, offline sharing as well as the harder to measure online sharing via email and IM, the social media component is only about 2% of the total.

The Atlantic’s Madrigal concludes her piece by observing, “I think there are some philosophical changes that we should consider in light of this new data. While it’s true that sharing came to the web’s technical infrastructure in the 2000s, the behaviors that we’re now all familiar with on the large social networks was (sic) present long before they existed, and persists despite Facebook’s eight years on the web.”