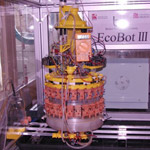 Scientists in the UK have developed a robot that is powered with sewage waste, or, in more layman’s terms, poo. Called the EcoBot III, it’s entirely powered by energy processed by its microbial fuel cells, which turn waste into energy. Using this mechanism, a robot could be capable of refueling itself autonomously by picking up waste material from the environment. The robot was built by a joint venture of the Bristol Robotics Laboratory and Wessex Water, a regional water and sewage treatment business. Read the full story at Mashable.