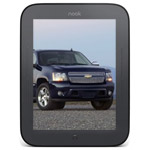 About five years ago I bought a Chevy Suburban (aka “the Rig”). I got it for a great price. The gas mileage is terrible but I only planned to use it to go camping at Timothy Lake or snow shoeing on Mt. Hood. It turned out that the Rig also really came in handy when you had to haul stuff around, like when I told my brother I’d help him get rid of his couch last weekend and then get a new one.

We got the old one out on Saturday, and had plans to pick up the new one on Sunday. I got up bright and early and went out to jump in the Rig and get going. There was one problem: the doors wouldn’t open. I tried the key fob (aka “the donker”) to unlock the doors, but nothing happened. Pressing the unlock button on the donker harder didn’t seem to do any good, nor did pressing the button harder and pointing it directly at the Rig. Realizing that the battery in the donker was probably dead, I decided to go old school and actually use the key to unlock the door. When I slid the key in the lock and turned, nothing happened. The doors still wouldn’t unlock. Then my phone rang.

My brother was on the phone and itching to get going to get his new couch. “I have nothing to sit on!” he said.

“I can’t open the Rig,” I repeated. “I tried the donker and then the key but it won’t open.”

“That’s weird. What are you going to do?” my brother asked me.

I had an idea – I’d call my mechanic, Tom Dwyer. We’ve been taking all our cars to Tom for almost twenty years. I gave his shop a call and he picked up. Tom’s a nice guy – a mechanic you can actually trust.

Tom laughed. “I hear ya man,” he started. “Listen, take out your credit card.”

“Huh?” Tom’s never a guy that goes right into talking about money and fees.

“Just take out your credit card,” he repeated.

“What’s the expiration date on your card?” Tom asked.

“That’s your problem,” Tom answered. “Your credit card’s expired. It’s in Chevy’s new contract. If you don’t have a valid credit card on file you can’t get into your car.”

End of story. Sounds crazy right? It is. This didn’t actually happen to me, but it is the exact thing that is happening to Barnes and Noble ebook customers. The license agreement for B&N ebooks says that if you don’t have a valid credit card on file, you can’t get access to the ebook that you have already bought and paid for. This is just the latest in the weird and strange world of DRM and digital media.

Now before we throw our hands up in the air and say that media companies have gone crazy, it’s important to point out that transferring real world examples to the digital world get tricky. Imagine in my story if I’d loaned the Rig to a friend of mine, and when he drove it away it left behind an exact copy of the Rig that I could continue to use without any inconvenience. That’s crazy as well. But with file sharing in the digital world, it’s possible to make multiple copies of an asset.

As companies make the shift from analog to digital, it’s clear that it’s a bumpy road. It made me wonder: What is the future of DRM? I’m not a DRM expert, but I know one. I called him.

Cory Doctorow is an activist, writer and co-editor of the blog Boing Boing. He’s been at the front of the digital rights debate for about as long as the debate has been around. He makes his living from the very assets and content that are at the center of the debate. Cory is a best-selling writer who gives away his book online. That’s like Steven Spielberg giving you the option to go to his web site and download Lincoln for free, instead of paying $20 to see it in theaters. For Cory, this is not just an intellectual debate.

Cory has been outspoken and articulate about the fact that putting DRM on a piece of media has never made it more attractive to consumers. People don’t choose a book or a song by the amount of protection it has wrapped around it. Would this Barnes and Noble instance spur DRM to go away?

“I’m not that optimistic,” he replied matter-of-factly. He disagreed with me that DRM was a transition problem as industries make the move to a digital world. “It’s the assumptions that are the problem,” he explained. “Making assumptions about people and how they can and can’t use the products they buy and then moving those assumptions into software is the height of hubris. It’s like trying to define things like What is human? or What is life? or What makes a family? That never goes well. Wars have been fought over assumptions from those questions.”

This becomes more complicated when it comes to cultural objects like books, songs and movies, which is the very area that DRM seeks to regulate. Culture, by its very definition, is complicated and varies wildly from people to people. The value of these cultural artifacts actually comes from their diversity. Trying to make assumptions about how these artifacts will be used becomes much harder.

“DRM will always have public relations debacles like Barnes and Noble,” Cory explained. “You don’t hear about the little things, the small inconveniences. What you do hear about are the idiotic examples that make it into the press or the examples that undermine people’s security.”

This is the nasty knot that needs to be untangled in regards to DRM and other regulatory and business rules. We know that more and more of our lives is going digital. Certainly we need to protect people’s assets and security.

Can we to stop pretending like the physical world is so simple? If we embrace this complexity, will it allow us to think differently about how we account for it as we transition to the digital? Can we accept that the things that we think we understand today might become radically different in a connected world? And that this isn’t a bad thing?

I often like to ask people what their request of the future would be. I don’t ask them to make predictions nor do I ask them what they think is going to happen. I want to know what they want from the future. I asked Cory this question.

He thought for a moment then replied: “My request would be that legislators and regulators stop creating moral hazards for people.”