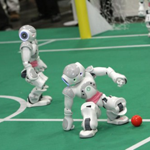 I’ve been thinking about the future of robotics, artificial intelligence (also known as A.I.) and the future of sports. I’m a futurist and can’t help it. When I talk to people about the future of these things, people are pretty fearful of it. They worry that robots will take our jobs and that A.I. will get so smart that they will not only take other jobs but might even take over the world. To some this might sound a little silly, like a bad science fiction film, but for many people this is a real fear. It might be an irrational fear, but it has an effect on their outlook for the future and their attitudes toward technology and scientific advances. It’s this last point that gets me interested.

Fear is a very powerful thing. The human brain, when it’s afraid, can make three decisions: fight, flight or freeze. No great innovation was created from a point of fear. People make balanced decisions and come up with amazing ideas when they feel safe and can freely collaborate with others. But even though we might know this as a species, we are still drawn to fear.

And why shouldn’t we be? As humans one of the things that has keep us around for so long is our mammalian tendency to jump to the worst case scenario. When we are walking though the woods and hear a twig break behind us, most of us will involuntarily jump. That’s our incredibly advanced body hearing the twig break and our bodies reaching to danger thinking “Saber tooth tiger!” That’s a good thing. For the time being, we have won the evolutionary top spot on the planet. But the problem is that we don’t live in a world of saber tooth tigers anymore. More recently, as we think about A.I. and robots, fear can get in the way of real progress.

This is why sports makes me so hopeful for the human race. Playing, watching and being a fan or sports is an intensely human activity. For all the advances in technology, sports comes down to human ability and human connections between fans and their teams.

To help illustrate this, I went to my in-house statistician, Jackson Lusciatti. (To be honest, Jack is my 11-year-old nephew, but the kid is a machine when it comes to stats.) Jack pulled out two examples of why humans beat robots: Carl Crawford, the left fielder for the Boston Red Sox, and Andre Johnson, a wide receiver for the Houston Texans, are statistically masters of their games.

In 2009 Crawford was named MVP of the All Star Game after making a leaping catch at the top of the 8-foot outfield wall, preventing a game ending home run. Just as spectacular was Andre Johnson’s one handed catch against the Tennessee Titans.

Watching these plays, you can hear the astonishment in the announcers’ voices. These are truly amazing catches. Not only are Crawford and Johnson great athletes, but they also have exceptional training. Their minds and bodies have been conditioned to make split-second adjustments while running across a massive field to meet up with and catch a tiny ball flying at them through the air. It should also be said that both men were being menaced by oncoming opponents. For Crawford, it was the 8 foot wall, while for Johnson it was the two Tennessee Titians that were chasing him. Despite these opponents, both men caught the ball.

Now, this happens every week in most professional sports leagues: human beings do amazing things. Heck, entire channels are devoted to highlights. When I watch these clips and others like them, I’m struck by how hard it would be to program a robot with artificial intelligence to catch that ball. We do have robot-soccer leagues, but they are nowhere near the brilliance of professional play. I don’t know if you’ve seen the RoboCup, but watching the footage will make you less worried about a robo-apocalypse and make you think more about cute cat videos.

For Crawford and Johnson, the complexity of mental and physical actions needed to catch that ball is astounding. The human mind and body are truly amazing machines, capable of complex tasks at high speeds. To me, the fear that we might be overrun by the machines doesn’t celebrate the marvels of what we have achieved as humans.

“That’s one of the hardest things in the world to do: track a ball over a long distance and catch it,” Mike Pesca agreed when we chatted earlier this week. Mike’s a National Desk correspondent for National Public Radio and covers sports and pop culture. “Pitchers and linebackers could probably be replaced by machines, but not the outfielders and wide receivers.” He went on to call out history making plays like 1972’s Immaculate Reception and players like Gary Mathews, Jr., and center fielder Jim Edmonds.

“Edmonds was known for charging straight back and diving for fly balls with his glove above his head. No machine could do that,” Mike laughed. “The complexity and split-second minor adjustments a player has to make are huge. But you know the one area where we should replace humans?” Mike added. “We could use machines to do the umping and refereeing. Professional teams can’t stand any more really bad calls. Even on TV, announcers know when the umps have made a mistake because they have the technology to help them. That’s one place where I’d love to get a robot in there. No more bad calls!”

We might be able to use robots in factories to replace human labor. We can even develop an A.I. smart enough to beat humans on Jeopardy!, but there are so many things that humans are good at that computers and technology are nowhere near. Professional sports is a daily reminder of this fact. There are teams of scientists and engineers all over the world developing smarter A.I. and better robots, but the A.I.’s of Summer is a long way off. In the wake of a rough few weeks, it’s important to relish that being human is still a good thing.