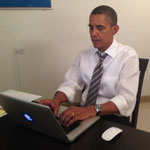 Barack Obama’s victory on Tuesday night has far-reaching fiscal, social, and military implications, all of which are familiar to anyone who kept at least one eye open during any of this year’s debates. But what do four more years mean for tech? Turns out, a lot. While Obama hasn’t indicated that he’ll dramatically change course on any of his technological policies and initiatives, it’s useful to look a little closer at the ones he’s got. Here’s what we can expect. A Free Internet: One of the biggest threats a Romney presidency posed was to net neutrality. In his mind, broadband providers should be wildly unregulated, able to block access to competitors if it provides a competitive advantage, or if they just feel like it. Read the full story at Gizmodo.