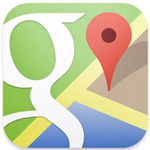 After some intensive testing since its yesternight release, there’s no doubt about it: Google Maps for iOS is, hands down, the best maps application, perhaps on any platform. So good, so fast, and so clean. There’s really no contest. They nailed it, and shamed Apple in the process. I thought that maybe my first impression—playing with it for an hour immediately after downloading it the moment it came out—was influenced by my suffering with Apple Maps since I upgraded to iOS 6 in September. No matter what the Apple apologists say, Scott Forstall’s final horrorshow was a rushed-out excuse of a product with poor location information and bad search logic dressed up with flashy skeuomorphic traffic signs and some useless features (“this sucks… oh, hey, we have 3D buildings!” *drops smoke bomb*).

PreviousFacebook for Android Gets Turbocharged With Complete Overhaul NextThis Week in the Future: Religion & Tech: A Match Made in Heaven