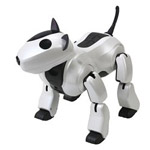 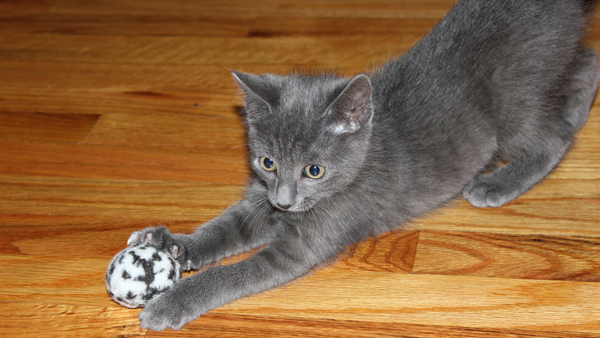 Look at that kitty! Come on; that’s a cute cat. His name is Merlin!, and yes the “!” is a part of his name. He’s a new arrival to Team Shelly Palmer and fresh from the animal shelter.

It’s the holiday season and this week we’re all a little pet-mad. We’re not alone. According to the American Humane Association, about 63 percent of dog owners and 58 percent of cat owners will give their furry little friends Christmas presents. That tallies up to a cool $5 billion annually in holiday gifts for pets. Not something to humbug.

You might think that the intersection between technology and pets might be a weird way to look at the future. Think again. Our four-legged family members often see advances in technology before we would ever allow them to be used on humans. Some of the most high-tech tracking and recovery systems today are used for our pets. In 1991, the implantable chip was invented for use in dogs. It’s a small RFID chip that’s about the size of a grain of rice. It’s inserted just under your pet’s skin and can carry all kinds of information from pet ownership, medical history and breeding linage. The little chip can even be used to unlock pet doors.

How about that as a holiday gift? Here’s your new identification chip: the YOU chip! Never worry about forgetting your driver’s license, ID or ever your keys. All of it could be handled by you own little grain of rice!

Why don’t we all have chips? Humans are a lot more complicated than pets. Implanting anything into the human body opens up a huge can of worms. It freaks most people out. If you can get past that, there are governmental regulations. Would the FDA regulate your chip?

Don’t forget about the standards issues. Will your chip talk to your front door? Can it communicate with your car door? Can police from other states read your chip? What about standing in the immigration line at Heathrow Airport on your vacation to London? It spells a lot of trouble.

Humans are complicated. Pets, on the other hand, are not so complicated. Because of this, they are a great indicator of what technologies might affect our lives in the future.

Designing a Cat With the Click of a Mouse

If we are going to be able to design our pets in the future, we are going to need tools to do it. I called Adobe’s VP of Experience Design, Michael Gough. His job is to oversee the development of all of Adobe’s software tools, like Photoshop. When I told Michael I was thinking about the tools that we might use to design the pets of the future, he sent me this:

This software, paired with the appropriate printing technology, enables non-professional non-creatives to design, program and build their own synthapets in the privacy of their own home. The suburban invasion continues with the fully reconfigured and massively updated version of this highly popular software. New features include highly tunable obedience, cuteness and aggression factors. Let your imagination run wild and then let your Synthapet do the same. Charm your children, frighten your neighbors, protect your turf and generally support anarchy in the burbs with Synthapet 3.

This was a thought experiment that Michael did, imagining a consumer pet design tool for the year 2025. “It only makes sense that we would do this,” he said. “We manufacture most of our pets today. I was watching the dog show when I was thinking through the Synthapet 3. Watching all the dogs parade by, I was amazed at variability we as humans had brought to the dog world. It just made sense that when we had the technology we would start designing our pets.”

Michael is a tool maker. He and his team have made the tools that millions of professionals and consumers have used to design many of the objects, visuals and websites we look at every day. I asked Michael how he and his team would seriously approach creating a tool like this.

“First, we would consider what the customer really values and what would be most important to them,” he said. “That’s where this gets really interesting. If you think of designing pets, most people first think about what the pet would look like. The length of the legs, does it have long or short hair. But if you dig a little deeper, that’s not what people really care about when it comes to their dog or cat. People are more interested in their pet’s characteristics. What’s its temperament? What level of loyalty would you like? How trainable is the pet? There are so many really important factors other than looks.

“The future design of pets is really experience design,” he continued. “That’s where all software is heading. The future of pet design and software is more about emotional impact.”

“What’s the ‘Now with Biped Support’ part of your advertisement?” I asked.

“Oh that,” Michael chuckled. “We just wanted to make the point that if you can do it for pets you will eventually be able to do it with people as well.”

PreviousApple to Bring Mac Production to US in 2013 NextShelly Palmer Radio Report - December 7, 2012