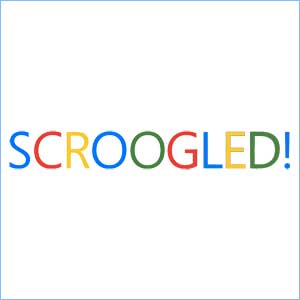 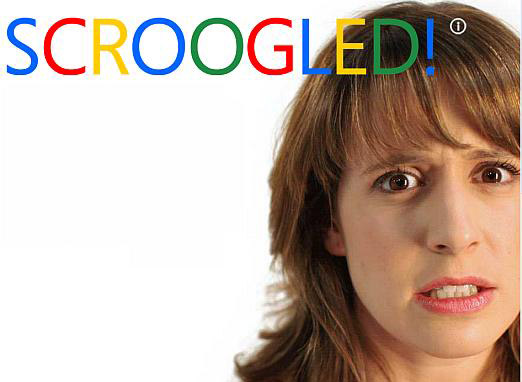 Microsoft’s Bing Team recently posted a short piece entitled, “The Choice is Clear, Don’t Get Scroogled this Year.” Here’s the important part: “We launched the “Scroogled” campaign to educate average people about what Google has done with their shopping site. Instead of showing you the most relevant shopping search results for the video game you’re looking to buy your kid, Google Shopping now decides what to show you based partially on how much the merchant selling the product has paid them. Merchants can literally pay to improve their chances to display their products higher than others inside of Google’s shopping ‘search,’ even if it’s not less expensive for you.”

Scroogled? Really? How many of you know the difference between Google Shopping and Google? Everyone! I thought so. If you type “Samsung Flat Screen TVs” into Google, you get a bunch of paid ads (placed where you’ve come to expect them) and a bunch of organic search results. Nothing has changed. I’m not Scroogled there. But I might be Binged into thinking that I am being Scroogled in the wrong place.

On the other hand, if you visit Google Shopping and you type “Samsung Flat Screen TVs” into the search bar, you will get a bunch of paid ads that are disguised as search results. This is how Bing thinks that Google is Scroogling you. Wow, it’s already a verb, meaning “to Scroogle.”

Are You Being Binged or Scroogled?

Over hundreds of searches, FusionGPS found:

We could chalk this all up to friendly competitive grousing between Bing and Google, except for the complaint recently filed with the FTC.

If you visit Google Shopping, you will notice a very small link in the upper right hand side of the page that says, “Why these products?” If you see it and happen to click it, a dialog box opens that says, “Products and offers that match your query. Google is compensated by these merchants. Payment is one of several factors used to rank these results.” According to FusionGPS, there are no results from merchants who don’t pay. I can’t verify this, but Bing seems to believe it too.

This disclaimer does not appear on product pages, so if you enter Google Shopping from a landing page other than its search page, you really have no way of knowing you are in a fully commercial, pay-to-rank environment… although, it would probably be better if you knew.

Is Bing Shopping any better? Bing says it is fully organic and its search results are solely based upon relevancy to the search, best published prices and merchant ratings.

Wait… When Did Google Become a Non-Profit?

I’m not sure that this is an earth-shattering issue, but I am fascinated by the “entitlement” articulated by the FTC filing and the audacity of the Bing attack. Google is a for-profit company. It is not a public service. In fact, Google is not a search engine; it is an advertising optimization engine that uses search as bait. You know Google is 100 percent about advertising because of the way advertisers are rewarded for creating the most relevant, most clicked ads. Which begs for the question, “Why isn’t Google entitled to create a for-profit shopping site?” Google could charge for everything if it wanted to. The reason it doesn’t is because you would stop using it if it did. Google search is provided free of charge; it’s worth exactly what you pay for it. If you are unhappy with the results, use another search tool. Nothing is stopping you? Oh wait, yes there is: for most of the things you need to find on the web, there isn’t a better search tool.

Sadly, Google only has to be better than Bing, and its other competitors, to keep you as a customer. As long as other search experiences are sub-optimal to Google, you’re not going anywhere. Google knows this, which is why it concentrates on optimizing ads, not content. I’m not saying that Google provides bad search results; I’m saying that it does not have any evolutionary pressure to do any better than it already does.

So, caveat emptor. Google Shopping is pay-to-rank. What should you do? Check the prices on amazon.com and buy.com and bestbuy.com, etc. before committing to a merchant on Google Shopping. Or, if it really bothers you, don’t use Google Shopping, the latter being the best (and only) way to inspire Google to change its policy. Oh, BTW: Bing actually mixes its paid and organic shopping results. Apparently, Scroogling goes both ways.