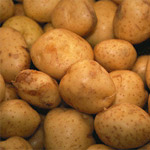 Boeing, the Chicago-based company that has built some of the world’s most sophisticated aircraft, has turned to a very basic food staple to test airplane Wi-Fi: potatoes. About 20,000 pounds of potatoes were used as stand-ins for passengers during tests at the company’s laboratories to ensure onboard Wi-Fi signals are consistent through the cabin without interrupting the navigation and communication systems, the company said Wednesday. The sacks of potatoes replicate the way human passengers reflect and absorb electronic signals, said Boeing spokesman Adam Tischler. Without the potatoes, Tischler said Boeing would have to employ dozens of people to sit in a grounded plane for hours while Wi-Fi signals are measured and adjusted. The testing idea has been dubbed Synthetic Personnel Using Dielectric Substitution, or SPUDS.

Read the full story at the Los Angeles Times.