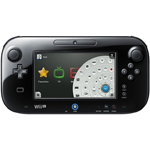 We’ve been waiting for the Wii U’s cable box/television-controlling TVii features to make it since the system launched late last month. As of Wednesday, it’ll finally be here. But without a few key components. The big omission is DVR capabilities through TiVo. That’s the only way to use the Wii U as a DVR, so it’s still not all the way there as a multimedia center. The other missing piece is Netflix, though that’s slightly less of a concern since the Wii U’s had Amazon Instant Video and Hulu Plus since last month. What is arriving, though, is the cable box functionality as a whole. The default TV remote feature is nice and effective for controlling your television’s inputs, or volume, but the wheel-like control panel for TVii makes actually picking the channels much easier, along with other functions. There’s also some social network stuff built in.