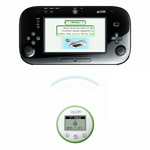 Buried amongst Nintendo America’s amusing (and often silly) Direct presentation from today comes news of the next iteration of its popular lifestyle experience: Wii Fit U. Outside of a few brief screens and a very vague first half of 2013 release window, not much is known about the updated title save for one bit — an included pedometer dubbed the Fit Meter. Functioning much like the Fitbit, this additional peripheral will, presumably, be clipped to users’ clothing, gathering movement data that will eventually be transferred to the Wii U console for use in over 77 game-based activities. Health-tracking is fast becoming a crowded space, so it’s no surprise the Big N would want to extend that plastic scale’s functionality with some real-world info. We’ll keep you updated on any further news as it’s released.