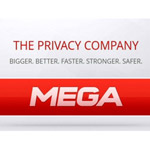 Mega — the long-anticipated file sharing and cloud storage site from Kim Dotcom — is now open to the public. Thanks to its association with the now-defunct Megaupload — and the legal issues facing its founder Kim Dotcom — the amount of press, user interest and hype surrounding Mega is greater than any file hosting/cloud storage launch in recent memory. According to Dotcom, more than 1 million users signed up for Mega in the first 24 hours. On Twitter, the larger-than-life entrepreneur has continued to share usage stats and traffic graphs that compare Mega with perennial cloud favorite, Dropbox. If you’re curious about the inner workings of Mega, how it works and how it handles security, we’ve got you covered. The Phoenix of Megaupload: Mega is the spiritual successor to Kim Dotcom’s last business, the insanely popular file-hosting service Megaupload.