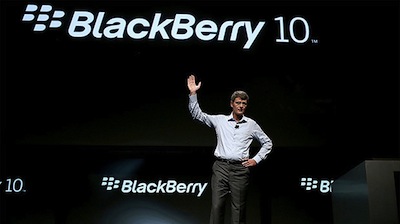 After a long period of negative headlines in the run up to the end of last year, beleaguered BlackBerry maker RIM seemed to have turned a corner, with signs that positive momentum was returning.

Early previews of its BlackBerry 10 platform were largely positive, with a view that the company is set to deliver a true alternative to market leaders iOS and Android, and Microsoft’s fledgling Windows Phone 8. Operators started announcing support for smartphones powered by the new OS, with Thorsten Heins, the company’s CEO, revealing in a conference call that more than 150 operators had begun testing devices, with more expected to join as the launch nears.

And the company’s Q3 results also showed that RIM is managing its resources effectively as it moves through its transition period, despite slowed demand for its legacy devices and increased costs related to its new launch.

But it does seem that the vendor is unable to report its numbers without there being a downside, and in the most recent case, service revenue was in the spotlight.

So, What’s the Downside?

Unlike its main smartphone rivals, RIM earns service revenue from its BlackBerry data users, and in Q3 this accounted for more than one third of its top line. BlackBerry email traffic passes through its network operations centres, and for this it collects a fee.

The company is already seeing pressure on this business. In Q3, its value was US$974 million, down US$19 million from Q2, reflecting “pricing pressures and fee reduction activities” as it looked to generate momentum for its existing devices.

And with the shift to a new operating model for BlackBerry 10, “we will be transforming our service revenue model to reflect different usage levels of our network infrastructure and different value-added software security and service packages”, Heins said in a conference call.

While this means that top-tier customers who use RIM to provide “enhanced services, including advanced security, mobile device management and other services” will continue to pay a premium, its mass market customers who do not sign-up for RIM’s value-added services will “generate less or no service revenue.”

So, some upside there, and some downside – until you consider how RIM’s subscriber profile is changing.

A New Look, A New Base

As RIM’s existing device line has lost its lustre, the company has ceded ground in many of its core markets such as the US, Canada and the UK, where customers have shifted to more appealing products from rival vendors. This has included the loss of lucrative enterprise customers, who have shifted to alternative devices as the “bring your own device” trend took off.

As a result, the company has seen a greater proportion of its sales from other markets – Brian Bidulka, the company’s CFO, said that sales outside of the US, UK and Canada increased to represent 65 percent of total revenue, compared to 58 percent in the prior sequential quarter. And the large markets highlighted among the others – Indonesia, South Africa and Venezuela – are not known for having a large, premium subscriber base.

The company is losing share of high-value customers in its most lucrative markets and replacing them with lower value customers in emerging markets. This means its BlackBerry subscriber base remains solid – at around 80 million – but does not bode well for the adoption of premium services in the future.
At least for the mid-term, this should not cause too much of a problem: its low-tier customers are still buying legacy BlackBerry 7.1 devices, and these earn RIM services revenue – even if there is a downward trend in average revenue per user.

But in the future, it will need to work hard to drive adoption of its value-added services among its corporate and business customer base, in order to try and protect what has proved a valuable revenue stream to date.

What Else is Up RIM’s Sleeve?

Of course, the company also has a well-regarded, mass-market consumer service in its portfolio, in the shape of BBM. The big question is whether it will be able to monetise this effectively, among what is a notoriously fickle customer base, and in the face of cross-platform rivals such as WhatsApp and Viber, which are already available for BlackBerry.

Heins said in the conference call that in the consumer space, “what we’re working on is how do we evolve BBM services to a stage where we can actually also create additional service revenues out of BBM” – but this is not likely to be straightforward.

RIM has spent more than a year as a company in transition on the hardware front, as it has worked toward the launch of BlackBerry 10 devices and – while it is clearly early days – there appears to be some light at the end of this particular tunnel. However, it is now facing a similar transition in its service revenue, and its strategy on this front is not as clear yet. With this business still bringing in nearly US$1 billion per quarter, it is not small change that is at risk.

(This column was originally posted on Mobile World Live.)

Steve works across all of Mobile World Live’s channels and played a lead role in the launch and ongoing success of our apps service. His next challenge is to manage and grow our devices channel. He has been a journalist and editor specialising in the telecoms industry since 1996. Steve has worked for a number of publications in staff and freelance roles, most recently working with market intelligence provider Market Mettle covering topics including smartphones, mobile value added services and operator strategy. He has also held staff positions with Financial Times Media & Telecoms, CMP Europe, ComputerWire and CI Works.