The big story of the 2013 International CES (the Consumer Electronics Show) was what was missing. A quick walk through amazon.com’s 1,000 retail show rooms (you may know them as Best Buy) tells the story. The electronics giant’s days – at least in its current form – are quickly coming to an end. Best Buy will have to reimagine itself in light of its real problem – several aisles of products are disappearing because… there’s an app for that. Point-and-shoot cameras, video cameras, music players, GPS systems, voice recorders, calculators, digital picture frames, and a hundred other products have all been rolled into smartphones and tablets. The number of manufacturers who are not showing these devices speaks volumes about where the industry is going.

A screen is a screen is a screen. You can get your content on any sized screen from 2 ¼” to 156″ in any resolution from VGA to UltraHD. The screens don’t care what you call them; they are just screens. The key takeaway from the show is this: screen ubiquity and diversity rules. What does it mean to be a media buyer for TV or Digital or Mobile when you are hard-pressed to know which screen is which. If a screen is too big to be called a smartphone, is it a phablet? A small tablet? Is the content you are watching HD, UltraHD, over-the-top, over a gateway, inside your home area network or authenticated over 4G? Which ones are mobile, which ones are wireless, where’s the set-top box. The level of confusion about what a device is will force content delivery and advertising models to adapt and evolve. All of this was on display at CES. 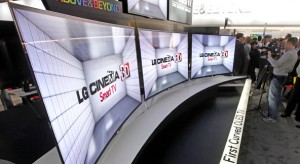 Almost every major manufacturer was showing off a big, beautiful UltraHD TV. 84″ to 110″ to 152″ … ooh! UltraHD (aka 4K) has four times the number of pixels of regular HDTV. Each frame of native 4K is 8.3 megapixels. If you’re wondering what that means, it means a mind-blowing picture – second only to OLED. Samsung had a 55″ curved OLED set that literally stopped your heart. The color space and contrast ratio of OLED is indescribable. Wow! That said, bring your checkbook. These will absolutely break the bank. 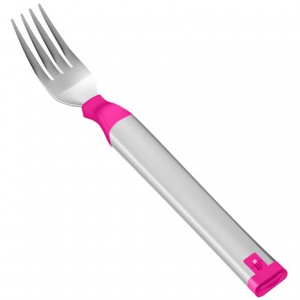 If you want to hook Grandma up via WiFi, you’re in luck because the South Hall was jam packed with hundreds of companies that focus on biometrics, health and wellness and, yep – there’s an app for that. One of the silliest health and wellness products at the show was the Hapifork, a wireless fork that monitors how fast you eat, vibrates to slow you down and reports to your iPhone via Bluetooth. On the other end of the spectrum were companies like Continua Health Alliance, where smart technology keeps patients, caregivers and healthcare providers connected and empowered to manage health and wellness anytime, anywhere. There are serious benefits to biometric and monitoring technology, and companies like GrandCare and Independa were doing their best to explain how we will live a better, healthier life using technology. 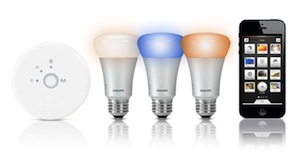 ZigBee and Z-Wave Partners showed how we will all benefit from living in a connected home. One of my favorite connected devices was the Hue lighting system from Philips. These are LED light bulbs that have a traditional Edison screw base. You can buy a starter kit, which has three bulbs and a controller, at the Apple store for $199.95. These lights can turn any color and, of course, there’s an app for that. Why do I love this? It’s the first truly innovative thing I’ve seen in an Edison base light bulb in my lifetime.

Google is road testing its self-driving car. Now, Audi and maybe Lexus/Toyota will follow. If this turns out to be true, we will see a significant number of socioeconomic changes. Why own a car when you can just tap an app and have a car drive itself over and pick you up? But there’s more — The idea of aerodynamic trucks that are 40% more fuel-efficient and run 24/7 without union drivers will dramatically change the prices of goods that are delivered over the Interstate Highway system. I could go on forever, but you can too. Self-driving vehicles will change everything.

If you just looked superficially at CES, you would think that iPhone covers and phone accessories were the most important thing in the North Hall, 110″ UltraHD sets were the most important thing in the Central Hall and ways to connect yourself to the Internet rounded out the South Hall. While this is mostly true, thinking this way would betray the true value of the 2013 International CES. This year, the show demonstrated how quickly our world is changing and it laid out a clear roadmap for what we should expect the future to hold. If you didn’t see it that way, give me a call.