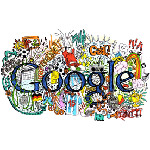 Some of the most lovable Google Doodles — the search engine’s custom logos celebrating a particular subject — don’t emerge from Google itself. They’re the winners of the company’s Doodle 4 Google contest, in which the company invites students from kindergarten through 12th grade to submit Doodles on a theme that’s been designed to inspire maximum creativity. On Tuesday, Google is launching the 2013 edition of the competition. This year’s theme is “My Best Day Ever…,” and there will be 50 state finalists in each of five different age groups, all of whom will be in the running for the overall grand prize. That’s 250 students in total whose Doodles will be honored. (This competition is for students in the U.S., but Google also runs similar Doodle 4 Google contests in other parts of the world.) The grand winner will get a $30,000 college scholarship, a $50,000 tech grant for his or her school, a Chromebook, a Wacom tablet and other prizes, plus a trip to New York for the awards ceremony.

Read the full story at TIME.