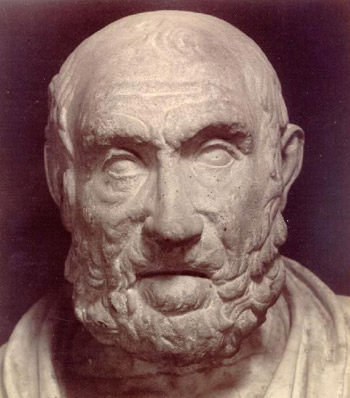 To see what is in front of one’s nose needs a constant struggle.

If I told you that an estimated one-third of all deaths in hospitals were caused by the treatments themselves, would that shock you? The term is called “iatrogenisis,” which is derived from Greek and means “brought forth from the healer.” Ever since Hypocrites, physicians had to take an oath that included “primum non nocere” – First, do no harm.

This concept has utility in every field imaginable. We make a mistake by believing the concept is domain-specific to the healthcare industry, yet it is far more widespread than that.

Who can look at the Iraq of today with over 1 million dead, 500,000 of them children, without wondering if the Hippocratic edict should have been invoked? With an interventionist foreign policy that stretches around the globe, we rarely slow down enough to even ask whether intervention might do more harm than good.

Our foreign policy, which claims to bring forth democracy and all the good that springs from it, has increasingly brought death and destruction. Only the blind cannot see that we have done much more harm to Iraq by intervening.

The rule of “First, do no harm” can be asked of our media coverage of national events. Some have moved from wondering if coverage of the Newton school massacre did more harm to our nation’s psyche to concluding that there was considerable harm done by media saturation.

Unfortunately, our media assumes more coverage is better. Media critic Jeff Einstein questioned the iatrogenic nature of media saturation in a recent column. He comes down clearly on the side that our media is not aiding in national healing, and the saturation is overwhelmingly damaging.

Whether you want to call them “bailouts” or the benign sounding “quantitative easings” (which now we are numbering… and if memory serves me correctly, we are up to QE IV), are policy makers other than Ron Paul questioning whether the interventions are doing more long term harm than good?

Black Swan author, Nassim Taleb, has weighed in with convincing arguments that these interventions create more harm than good. In his view, the “too big to fail” mantra will inevitably lead to even larger failures. We have shifted the responsibility for bank failures from the banks to US citizens. No harm? We shall soon see.

And then… Iatrogenesis and Online Marketing

If any readers are familiar with my writings on behavioral targeting, you will know that I believe BT is snake oil and does more harm than good. Anything that examines rewards without a thorough examination of the risks is a fool’s marketing errand. Charlatans prosper by peddling this iatrogenic marketing cure while the empirical evidence is rather weak. They have no skin in their own game, preferring to sell shovels to the proverbial miners.

All one needs to examine is the steadily declining click-thru rates. This decline occurs concurrently with the use of “sophisticated” targeting methodologies. Possibly because of its use.

I was at a round table discussion concerning online marketing when the topic of “relevance” came up. Those touting targeting one-to-one relevant offers rarely ask whether the practice is more costly than the derived benefits. In other words, is the practice of hyper-targeting more harmful than helpful in terms of profits?

When I raised this question at the table, I was met with dumbfounded silence. Everyone assumed relevance was an absolute positive that they never considered the alternative.

Almost all of the new online marketing methodologies involve the same interventionist mindset that has caused a great deal of harm in hospitals, foreign policy, economics… and do not get me started on overly-prescribed psychotropic drugs.

Let me state this as clearly as I can and without complicated jargon: Those peddling online targeting technologies are by and large frauds. Their “solutions” are:

There are many proofs for #5 above, from treatises on quantum randomness to explaining chaos theory. But the ancients have also pointed the way for understanding. In Semitic languages, the root for the word “prediction” and “prophesy” are the same. This leads to the notion of faith in predictions, even though faith is an anathema to marketing reductionists. They are unaware of the irony.

Online marketers with their thinly disguised faith in measuring everything are again unaware that the Sanskrit root for the word “measure” means “illusion.” It seems the ancients knew a lot more about 21st Century online marketing than we do now.