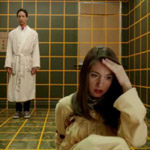 Mooly Eden steps out of the world of transistors and microprocessors for a moment. “If you want a simple explanation of what we’re doing, just look to Asimov,” the head of Intel’s Perceptual Computing push says, explaining. “Or Star Trek, Star Wars, and Avatar. The ideas have been in science fiction for years, and now they’re becoming fact.” They’re plainly taking sci-fi concepts and figuring out the road map to get there. That’s as direct a line into Perceptual Computing as you’ll find, since the plans that Intel has shown us to this point have been fairly ambiguous. Right now, we’re seeing the vanguard arrive, with features like the eye-tracking Tobii, a Kinect-like gesture and motion sensor, and human recognition and overlay. The long-term goals, though, are much more ambitious. “Wearable is inevitable,” Eden says, referring to Google Glass-like tech.