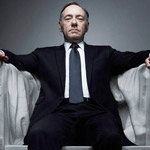 Taking a page from Amazon’s Kindle playbook, Netflix says its homegrown series “House of Cards” is its most-watched title, but declined to give any numbers. “I don’t want to give ratings, because it is a real apples-to-oranges comparison with network ratings,” Netflix Chief Content Officer Ted Sarandos said, speaking at our D: Dive Into Media conference. “We’re thrilled.” Sarandos said that, the way he looks at it, the question is, did Netflix get more for its millions by creating the show than it would have by spending that money elsewhere? The answer to that, he said, is yes. In another positive sign, nearly all of the early viewers who watched the first episode watched multiple episodes, Sarandos said. And, of course, Netflix has already ponied up $100 million for two seasons of the show. Sarandos was asked what levels of viewership it would take for him to give details.