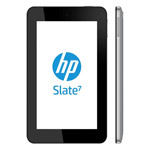 HP is back in the non-Windows small tablet game, and this time Android is the platform. The company’s webOS-based TouchPad may have been loved by some, but not by enough to help HP battle the iPad. Now, after a year of licking its wounds, HP has returned with the Slate7. The Slate7 is HP’s new entry-level tablet, a cheap-ish 7-inch Android device that has two main selling points: its shell is stainless steel, and it features Beats Audio, just as the TouchPad did. The choice of materials means the Slate7 is not the lightest in its class – at 368g, it outweighs the 340g Nexus 7 and 308g iPad mini — although it is lighter than the 395g 7-inch Kindle Fire HD. As for Beats Audio, well, it should produce decent bass. The tablet runs on an ARM dual-core 1.6GHz processor and has a 3-megapixel camera on the back and a VGA camera on the front for Hangouts and Skype .

PreviousQualcomm Announces Global LTE Chipset NextThe Internet of Things: Our Lives Are More Connected Than Ever Before