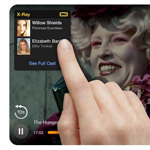 Amazon just announced that it is adding its X-Ray feature to TV shows. The feature already worked with movies thanks to data from IMDb, but the company will now use this very same data for other video content. The entire Kindle Fire family will receive the feature and the Amazon Instant Video app on Wii U will get is as well. As a reminder, X-Ray allows you to discover more about the content you are reading or watching. It first appeared with books — it shows you the different characters, where they appear in the book and how they are related to the story. Then Amazon added X-Ray to movies back in September 2012. In that case, watchers can instantly know the name of an actor in a scene. IMDb is owned by Amazon, allowing the Kindle team to tap into a very comprehensive movie database.