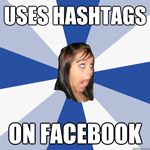 If you’re #dying for #newwaystoexpressyourself then you’re about to read some #goodnews (#rumoralert!). The #wallstreetjournal says #facebook will “incorporate the hashtag” on its own (#copying much?). It seems inevitable: hashtags are probably hitting your news feed. #ugh. Details are scant: “It is unclear how far along Facebook’s work on the hashtag is and the feature isn’t being introduced imminently, these people said,” the Journal says as it strokes its crystal ball, and perhaps the thigh of a Facebook engineer. Using hashtags would help Facebook on its quest to destroy Twitter—the current status update system is a total aping of tweets, after all—and allow us to get in on group discussions by clicking a keyword. You could see what yokels all over the nation are saying about the #superbowl, directly from your News Feed.