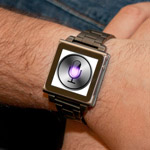 Apple plans to debut its much rumored smartwatch later this year, according to a new report. Bloomberg on Monday issued a claim that the so-called “iWatch” could pose a larger revenue opportunity than the HDTV Apple has supposedly been working on for years. The report suggests that Apple hopes to launch the device later this year and is considering a variety of functionality such as voice calling, mapping features and the ability to display notifications from the user’s phone on the watch’s display. The report claims Apple’s iWatch will also include pedometer features, and it may even monitor the wearer’s heart rate.