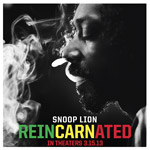 Snoop Dogg’s reinvention as reggae artist Snoop Lion is yielding a documentary film and album, both called Reincarnated and due for release this month. Now there’s an app for that too. Snoop Lion’s Reincarnated: Track Notes App is a free download for iPad, released by digital publishing startup Citia, which has previously launched apps based on books by Kevin Kelly, John Maxwell and Dan Ariely. The Snoop Lion app is the company’s first venture into music, and the latest attempt to find a digital replacement for the liner notes and artwork from vinyl and CD albums. “What you get isn’t just the music – it’s ABOUT the music,” explains its App Store listing. “Where it came from, How it was made, WHY it was made. It’s liner notes for the 21st century. Multimedia, multi-sensory, made for the fans.”