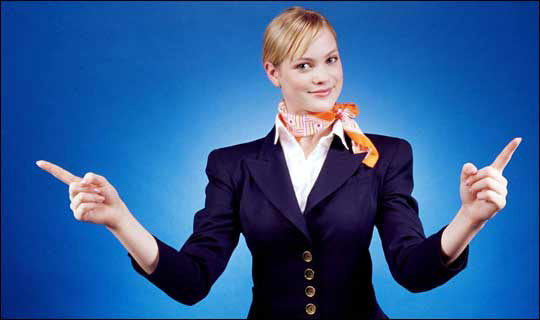 We did it, America. After years of complaining in coach and fussing in first class, we’re about to get our way.

The Federal Aviation Administration (FAA) hopes to announce by the end of the year that it will relax the rules on reading devices during takeoff and landing. The rule change would not apply to cell phones.

It appears the FAA’s long-standing argument — that our electronic devices interfere with the cockpit — is grounded on the tarmac. Without proof, the FAA may finally let us operate Nooks and Kindles without interruption. Hooray!

While no one likes to be bothered, especially during an engrossing chapter of ‘Gone Girl‘ (my wife couldn’t put it down), there is a four-minute period when everyone should stop what they’re doing and look up. People reading paperbacks: this applies to you too.

Yes, you’ve heard the spiel a hundred times. Yes, you can probably recite it line-by-line. Yes, it’s far less interesting than anything on your e-reader.

We should all grant flight attendants our attention — or at least feign interest and make eye contact — during the safety speech. Why?

It’s the polite thing to do.

Think about it like this: You’re giving a business presentation to a room of strangers. Some people in the crowd have heard your pitch before, others (i.e. first-time flyers) are new to the scene. Imagine if everyone in the audience is head-down in a book and completely disregarding what you have to say?

If only flight attendants could swallow swords and juggle fire while they show us how to turn a seat into a flotation device. Attendants don’t want to bore us, but they’re only doing what the corporate bigwigs ask of them. No razzle-dazzle, unlike these two guys…

On top of that, we’re preparing to go up 30,000 feet and hurtle ourselves 300 mph through the air. Doesn’t that reality warrant a sliver of our attention? Even if we’ve heard it all before?

Part of the problem is that we don’t understand the safety precautions. USA Today has a terrific article that explains many of them. For instance:

Why do they make you put your seat backs in the upright position?

This makes it easier for you to get out of your seat, and in case the person behind you has to assume the brace position he’ll have more room to do so.

Why should you put your own oxygen mask on first before helping others?

Because in a cabin decompression, air will be sucked out of the cabin so quickly that you only have 30 or so seconds before the lack of oxygen will make you groggy and “euphoric”— making it harder to put the mask on. After 45 seconds, you’d probably pass out.

Well, I did not know that. Thank you, USA Today.

The FAA is poised to surrender its rule on e-readers by the end of 2013 and for that we should be thankful. In the end, there may not be a connection between electronic devices and a plane’s mechanics.

Yet there will always be a link between technology and common courtesy.

On the plane, we’re not ignoring a safety speech; we’re giving the cold-shoulder to a presentation that cost us $400 in airfare.

Isn’t that worth four minutes of our day?

Do you think it’s time the FAA allows us to use reading devices during takeoff and landing? What about cell phones — are they next?