We’re moving into a post-PC world. With shipments of traditional computers slipping and the stocks of all companies involved tanking, it looks to be the beginning of the end for computers. Long live the tablet!

Tablets are great for lounging around at home with – for watching videos, checking your e-mail and favorite sites, playing a game or two to kill the time. But when it comes to work, which ones are the best to help you stay productive and get the most done?

(1) iPad mini ($329-$659) – This is the tablet to beat right now. You get everything you have come to know and love about iOS in a sleek and easy-to-carry 7” form factor. Why does size matter?  First and foremost, you can type standing up.  You do not need to put the iPad mini down to use it. It’s small enough that you can tuck it in your pocket everywhere you go, yet still packs the same power that the iPad 2 has (which is a solid tablet in its own right). While it doesn’t have Office, the App Store does offer Apple’s iWork suite of Pages, Numbers and Keynote, each at a reasonable $10. If you’re used to the Microsoft environment, it make take some getting used to when transitioning over, but mastery of this software will keep work productivity high. iPad is the most popular tablet on the market, which means it’ll also be the most popular in the workplace. Another nice perk of buying an iPad for work is the ability to have one with built-in LTE.  The downside to the iPad is the inability to add-on storage, but connecting to Box, Dropbox, Google Drive, Skydrive, iCloud or any other cloud solution solves the problem nicely.  I have had an iPad mini since the day it came out.  While I had very little use for a full-sized iPad, the mini’s a keeper … for now. 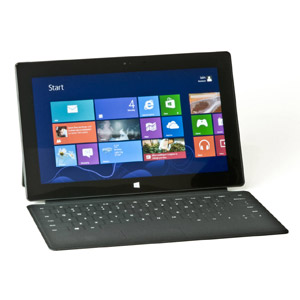 (2) Microsoft Surface Pro ($899-$999, $999-$1129 with keyboard) – It’s going to be hard to beat a tablet that was designed to replace a laptop. While Microsoft’s Surface Tablet with Windows RT tanked when it was released in the fall (and rightfully so), the Surface Pro is the real deal. It runs the full version of Windows 8, which means any program you can install on your desktop or laptop can be installed here, too. That means Microsoft Office, which doesn’t look like it’ll hit Android or iOS until Fall 2014, but which you’ll still have to buy separately here. There are two real downsides. The first is the cost – it’s head and shoulders above most of the market when it comes to price. You can pick up the cheaper model (a 64 GB version) without a keyboard for $899, but you’ll want the keyboard to maximize productivity and get the most out of the Surface. The other downside is that there’s no option for LTE. Maybe on the Surface 2, but not yet. 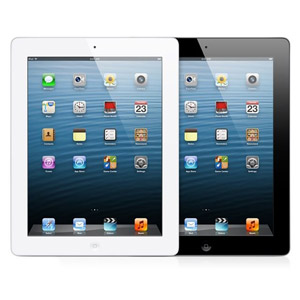 (3) iPad 4th Gen ($499-$929) – iPad is the King of the tablet market for good reason. It seems as though most major mobile software is developed for iOS first, then ultimately ported to Android. Aside from form factor, every advantage that the iPad mini has over its competitors is true of the full-sized iPad as well. That means no Office, but the iWork suite. It means it’ll be common in the workplace and easily used and incorporated. But it also means that there’s no expandable storage. The full-sized iPad is far, far more powerful than the mini, and has a much better screen as well. 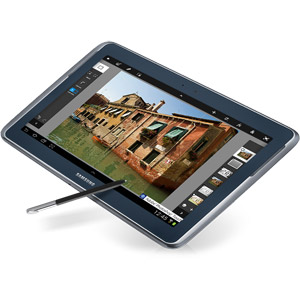 (4) Samsung Galaxy Note 10.1 ($499-$549) – What list of electronics would be complete without an entry from Samsung? The Note 10.1 is another 10” Android tablet that’s great for the workplace. While there is no first-party keyboard for the device (like there is for Surface or the Infinity), third-party Bluetooth keyboards work with it. What sets the Note 10 apart from most of the rest of the tablets on the market is its top-tier stylus. The S Pen, which Samsung uses in both its phone and tablets lines of products, is great when you need a precise touch. Working on a spreadsheet for a presentation in the morning? The S Pen has your back. 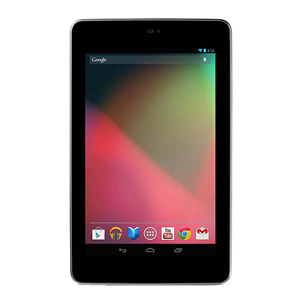 (5) Nexus 7 ($199-$299) – While the next-gen Nexus 7 should be hitting store shelves later this year at a cheaper price (and maybe even with LTE!), that doesn’t mean you should pass over this little guy. At a 7” form factor, it’s more portable than both the Surface and iPad… and it’s much cheaper, too. At the $299 price point, you can get 3G coverage from either AT&T or T-Mobile, which is a nice feature, even if it’s outdated by this point. (But staying connected on the go, however slowly, is still better than not staying connected at all.) If you’re wondering why a cripled 7″ tablet is on my top five list for work tablets, I’ve got one word for you … price! 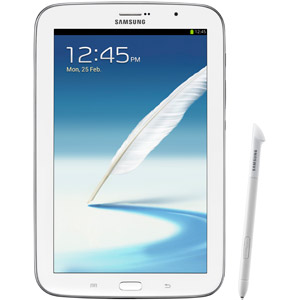 (6) COMING SOON: Samsung Galaxy Note 8.0 ($399 for the Wifi version) – While the Wifi version hit store shelves on April 11, the LTE version isn’t available, though Samsung says it’s working on that. If the LTE version were available today, this would be the #1 tablet on this list. It has power… unlimited power: it’s as powerful as the Galaxy Note 10 in a smaller form factor, with none of the issues. It comes with the same S Pen that makes the Note 10 shine. This product was aimed to take down the iPad mini, and when the LTE version comes out, that’s exactly what it’ll do.

Do you use a tablet for work? Which have you found works best?