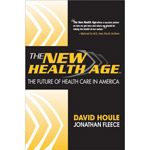 What is the New Health Age?

It was clear to us that humanity on a global scale was entering a new age of healthcare and medicine that we called the New Health Age. This new age would usher in transformational changes in healthcare and rapidly approaching medical miracles and that the economics of health care would be turned upside down. We were clear that this would be a global phenomenon and that it was important to look around the world to see where the future that would be the New Health Age was first appearing.

Our research quickly pointed to a true visionary doctor in India. We realized this was significant due in part to the explosion in medical tourism around the world. To quote directly from “The New Health Age: The Future of Health Care in America”:

Dr. Shetty did not stop his vision after building his 1,000 bed heart hospital. Adjacent to Narayana, he built a 1,400 bed cancer hospital and a 300 bed eye hospital. These facilities share laboratories and a blood bank with the heart institute for efficiencies and cost savings. Dr. Shetty’s family-owned business group, Narayana Hrudayalaya Private Ltd. Reports a 7.7 percent profit after taxes, which beats the 6.9 percent average for a U.S. hospital.

Soon, Dr. Shetty plans to open a 2,000 bed general hospital in the Cayman Islands, seeking to draw more Americans on a one hour plane ride from Miami. He plans to price procedures, both elective and necessary, at less than  50 percent of the cost of what they would cost if performed in the United States.

The Quality Is There, Too

How is the quality of care at Narayana Hospital? Dr. Shetty reports a 1.4 percent mortality rate within 30 days of coronary artery bypass graft surgery, one of the most common procedures, compared with an average of 1.9 percent in the U.S. in 2008. Dr. Shetty claims that his mortality rates would be even lower if he adjusted the figures for risk, because his patients are often sicker than the average U.S. cardiac patient. Many of Dr. Shetty’s patients lack access to basic health care and suffer from more advanced cardiac disease before they finally have surgery.

So for the last two years, I have been talking about the inevitability of transformational change in American health care to audiences in the U.S. and Australia. To make the point, I have consistently said that an American needing a heart bypass surgery could fly to India, have surgery performed by one of Dr. Shetty’s surgical teams, recover, have the family member accompanying them stay in a nice hotel for a month and then fly back to America and it would cost less than going to one of the higher profile cardiac centers in the U.S. And they could do it all with a higher probability of living!

There were two reactions to this statement whenever I made it. The first one was that this was incredible and that U.S. healthcare was indeed overpriced and expensive. The second was that of course Dr. Shetty could do this as everything is so much cheaper in India.

Why am I writing this? Because recently, while on Grand Cayman Island for a speech, I met the small, dedicated and brilliant team that is working with Dr. Shetty to build the hospital we wrote about in the book three years ago. I actually toured the construction site, which is remarkable in and of itself.

Dr. Shetty and his team wants to show the world that superior, compassionate and dramatically lower cost surgery can be done in the “Western World” with Health City on Grand Cayman.

As a futurist, it was exhilarating to see the New Health Age I have envisioned actually taking shape and becoming a reality. In my next column, I will write more about Dr. Shetty and his vision for Health City in the next column. For now, please take a look at what will be one of the most significant institutions of the rapidly approaching future of medicine.