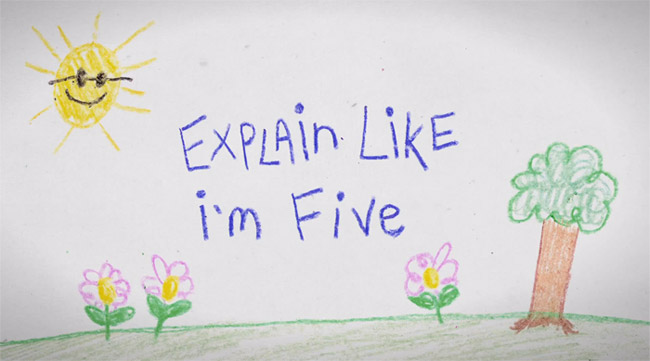 Until I watched the Reddit video on existentialism, I couldn’t tell you what it meant. Sure, I had heard about the philosophy once or twice, but the actual definition… a bit hazy.

Good thing I stumbled across a clever new YouTube series called ‘Explain Like I’m Five.’ The Reddit team makes it easy to understand complicated ideas. The other two videos produced so far cover the crisis in Syria and the volatility of the stock market.

As for existentialism, here’s a quick education:

If a group of inattentive five-year-olds can handle Nietzsche’s outlook on existence, surely grown-ups can too. AT&T has the same idea with its recent spate of ads, in which an adult makes the onerous task of picking the right cell phone plan uber-simplistic for small children (and the rest of us).

‘What’s better: doing two things at once or one thing at once?’

The ‘Explain Like I’m Five’ video and the AT&T ad have the game figured out: everyone, young and old, likes to have things explained in an elementary way.

So, the real question:

What does all of this kid-speak mean for you?

No, we’re not sparking a nationwide trend to act like we’re five. We don’t need full-grown adults talking about grandmas and cheetahs.

Instead, recognize what makes the Reddit video and AT&T ad effective – complex ideas boiled down to their essence — and apply it to how you explain things to others.

Here’s what to do:

Ever have writer’s block and can’t seem to put your thoughts on the page? You know what you want to say but the words won’t appear.

Look away from the computer screen, and ask yourself: ‘OK, what am I trying to do here?’

Say the idea aloud like you’re telling a friend. Forget about fancy vocabulary, and speak naturally. As you talk, write out those words. The perfect sentence might not emerge right away, but now you’re on the path.

You kept it simple.

Example: My Own Resume

I had trouble explaining one aspect of my job. I started out with this:

‘Help companies outside of the media to follow the stories that interest them and to understand those that could matter to their financial well-being, corporate strategies, HR decisions and general knowledge of the marketplace.’

After speaking it out, I was able to edit that sentence so that it made a lot more sense:

‘Help non-media companies understand and monitor the news that matters most to them.’

Quicker. Sharper. More direct. And it’s how I would explain that task to a friend.

Be brief and be yourself

Remember: people are not complicated. That same employer you’re hoping to dazzle with a cover letter is laughing on the couch as he watches five-year-olds explain why two things are better than one. Humans crave simple. So dish it out everywhere you can.

Now that you understand existentialism and the power of brevity in your writing, here are the other two ‘Explain Like I’m Five’ videos.