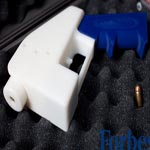 Cody Wilson set out to create the world’s first entirely 3D-printable handgun.  Now he has.  Wilson, a 25-year-old University of Texas law student and founder of the non-profit group Defense Distributed, plans to release the 3D-printable CAD files for a gun he calls “the Liberator”.  All sixteen pieces of the Liberator prototype were printed in ABS plastic with a Dimension SST printer from 3D printing company Stratasys, with the exception of a single nail that’s used as a firing pin. The gun is designed to fire standard handgun rounds, using interchangeable barrels for different calibers of ammunition.  Technically, Defense Distributed’s gun has one other non-printed component: the group added a six ounce chunk of steel into the body to make it detectable by metal detectors in order to comply with the Undetectable Firearms Act. In March, the group also obtained a federal firearms license, making it a legal gun manufacturer.  Once the file is online, anyone will be able to download and print the gun in the privacy of their garage, legally or not, with no serial number, background check, or other regulatory hurdles.