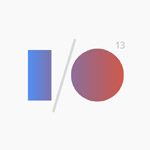 On Wednesday, Google held its annual developer-focused conference, Google I/O, in San Francisco, California. As expected, the tech giant made tons of big announcements, highlighting updates to existing products and showcasing new programs and hardware. All of the conference’s biggest announcements have been highlighted on this site already, but if you’re looking for a greatest hits rundown of everything Google offered, consider this post a good spot for “one-stop shopping” for all things Google I/O 2013. (If you want to read the announcements straight from Google, check out their press blog here.)