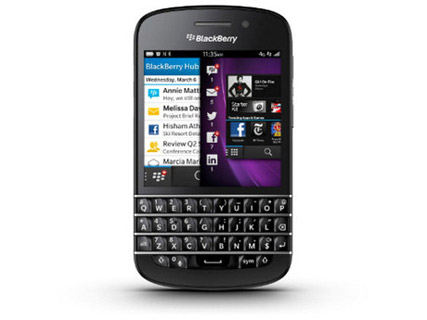 BlackBerry released its Z10 as a touchscreen competitor to the Apple iPhone. Running the new BlackBerry 10 OS, it has features that may keep BlackBerry customers from jumping to the iPhone or Android devices. Loyal BlackBerry fans, who still seek a tangible “QWERTY” keyboard, have a new option: the Q10, which maintains BlackBerry’s classic look with a few new features.

The Q10 is slightly larger than the Z10 and a bit smaller than the BlackBerry Bold. Its full QWERTY keyboard forces it to be thicker than the touch screen Z10. The back of the phone has a more rounded feel, because the composite material makes up the entire back instead of just a center panel.

The display is a 3.1 inch Super AMOLED screen that is 720×720. The screen extends down to the keyboard which, according to Engadget, takes a little getting used to when using the touchscreen. The finger swipe motions have to come right off the keyboard onto the screen to get the results you want.

Outside of the 2MP front facing camera, several external features will be familiar to the BlackBerry Bold user. On the top of the case is the power/lock button, headphone and microphone jacks. On the right side is the volume rocker with an additional middle button for pause/play. The left side holds the micro-USB connector and a micro-HDMI connector.

The Q10 is powered by the Qualcomm MSM8960 1.5GHz dual-core CPU. There is 2 GB of RAM on board. You can have 16 GB of built in memory and expand to 32 GB with the microSD card. One Washington Post Business review says you can expect 13.5 hours of talk time with the battery or roughly 60 hours of audio or 9 hours of video play time.

The Key is the Keyboard

The Q10 keyboard is nearly identical to that on the BlackBerry Bold. It doesn’t have the slight ergonomic curve, but it’s quick to get used to without it. The keys are the same size and have the slight curves that let your thumbs slide onto the keys, not off. Bold owners will have no problem transitioning to this keyboard.

The OS and the Apps

The BlackBerry 10 is still new and getting an active test by Z10 users. It controls the button-less touch screen, so the Bold user will have to get used to swipes and taps. The standard application functions that came with the Bold are on the Q10, such as email, messaging, multimedia software and miscellaneous utilities. Some additional apps come standard on the Q10 like a compass and maps.

The challenge for any new OS is the rate at which third party developers create apps for the platform. The library of apps available is slowly growing, but of course, is no where near that of the Android or iOS. How popular this new OS will be for app developers is still not clear.

An ABC News article begs the question “Can the keyboard bring you back?” Will slapping a QWERTY keyboard onto a smartphone being marketed as an Apple iPhone alternative be enough for those BlackBerry customers on the fence? The BlackBerry Bold OS is getting a little old and there is not much excitement; compared to the Android and iOS systems.

The Z10 may have kept BlackBerry customers from switching to an Apple or Android phone. We’ll have to wait to see if the Q10 can convince the Bold users to at least make one step up to a different OS, and yes, they can keep their keyboard.

Pat is a tech writer from Toledo, Ohio.