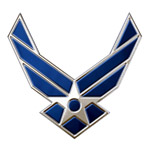 The U.S. Air Force is expecting to save a serious amount of cash as a result of deploying 18,000 iPads. With the iPads brought in to replace heavy, paper-bound flight manuals, a spokesman for the Air Force’s Air Mobility Command has said that the deployment will save $750,000 per year on fuel alone and “well over $50 million” in total costs over the next 10 years. “We’re saving about 90 pounds of paper per aircraft and limiting the need for each crew member to carry a 30 to 40 pound paper file,” Major Brian Moritz, manager of AMC’s electronic flight bag program, when speaking to The Street. “It adds up to quite a lot of weight in paper.” The AMC exec revealed that this weight saving did vary significantly by plane — from a saving of 250 pounds on a four-person C-17 to 490 pounds on a C-5 with ten crewmembers.